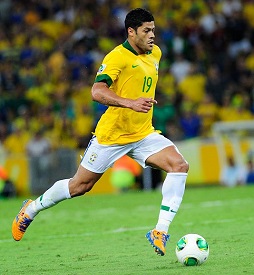 Selections from the 2014 FIFA World Cup make up the bets for today’s football accumulator tips on Sportingly Better, returning odds of 4.96.

Group B reaches a thrilling climax on Monday, with Netherlands and Chile both hoping to top the group and potentially avoid hosts Brazil in the knockout round.

Louis van Gaal’s side will be without Robin van Persie through suspension and Bruno Martins Indi at the back, so the Oranje are likely to revert to a 4-3-3 formation.

Opponents Chile secured an impressive 1-0 victory over World Cup holders Spain last time out, but Jorge Sampaoli likes to play on the front foot and a win here would secure the South American side an easier tie in the last 16.

Netherlands know they must avoid defeat if they are to avoid Brazil in the next round and despite the tendency to be more cautious in this game, Chile’s attacking mentality should see Holland resort to a similar approach on Monday.

World Cup hosts Brazil will be expected to secure their place in the knockout stages of this summer’s tournament, with Cameroon the opponents in Group A.

The African side have arguably been the worst team in the competition and after two games Volker Finke’s side have lost both of their games; conceding five goals without reply.

A spat of in-fighting on the pitch against Croatia has created an unhealthy atmosphere in the camp, whilst Chelsea striker Samuel Eto’o will face a fitness test ahead of the match.

Opponents Brazil know they will need to drastically improve from their showing against Mexico on Tuesday and with goal difference likely to be a factor on who will win the group, the Selecao are likely to need to register a big win today.

Fred’s place in the starting line-up is under threat, but the Fluminese striker could retain his place in Luiz Felipe Scolari’s side leaving the odds on Brazil’s lone striker to score anytime against Cameroon as arguably the best value bet in this match.

World champions Spain will be looking to restore some much needed pride, after unexpectedly crashing out of the World Cup at the group stages after just two games.

Vicente Del Bosque may make wholesale changes and that in itself may be refreshing for la Roja, with Koke, Pepe Reina, Juan Mata and Cesc Fabregas all likely to come in.

Opponents Australia have surprised many in Brazil and although the Socceroos have exited the tournament Ange Postecoglou’s more youthful approach may stand the side in good stead in four years time.

The absence of talisman Tim Cahill through suspension will be a blow for Australia and Spain should pick up their first win and points in the tournament.