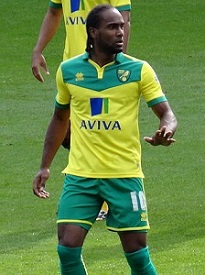 Goals from Nathan Redmond and Cameron Jerome helped Norwich secure an instant return to the Premier League via the Championship play-off final in May, but Alex Neil’s side look set to be up against it once again when they return to England’s top flight in August.

It’s been almost six weeks since Norwich confirmed their place in the Premiership, with the East Anglian side bouncing back at the first attempt.

The appointment of Alex Neil in the Carrow Road dugout at the start of the year proved decisive, with the 33 year old Scottish manager guiding the club to promotion with a swashbuckling run of 17 wins from 25 matches.

Tenure of just five months proved enough for the board, who were keen to tie Neil down to a long-term contract at the club.

The Canaries next task remains the manager’s toughest challenge to date, but the latest betting odds provided by 32Red highlight just how tough survival in the top flight will be for Norwich this season with odds of 2.05 for the drop.

The Curse of the Play-Off

Historically promoted teams via the play-offs have fared worse the following season in comparison to those teams that were automatically promoted and that statistic does carry some weight, especially over the last six years.

Not only has the club had less time to prepare their targets for the forthcoming season after a surprising late run, but having spent just five months at the club, Neil and his staff may not have a comprehensive and intimate grasp of the squad he has at his disposal; something that managers will come to need when battling the drop.

Whilst newly promoted Bournemouth have shelled out £8 million on Tyrone Mings and Watford have made a £7 million bid for Argentinean forward Diego Perotti, Norwich have only managed to pick up former Baggies midfielders Graeme Dorrans and Youssof Mulumbu so far during the transfer window.

The addition of both players will of course have undoubtedly strengthened Alex Neil’s squad and first eleven and although both signings carry plenty of Premier League experience, they are arguably both more suited to play Championship football.

The likes of Aston Villa, Leicester, Newcastle and Crystal Palace have already shown their intent for the forthcoming season with some major moves in the transfer market, with all four clubs priced at 3.75 or greater to be relegated from the Premier League this year with bet365.

Thirteen wins from 23 games left Norwich with the second best away record in the Championship last campaign, although last time the side was in the top flight two years ago the club had the worst away record with 14 defeats from a possible 19.

Although the club will be well prepared and well backed at Carrow Road, the side may find wanting on their travels when they face the division heavyweights of Chelsea, Manchester City, Manchester United and Arsenal.

Third top goalscorers in the Championship last season, the Canaries scored a total of 88 goals, but goals in England’s top flight will be a lot harder to come for Alex Neil’s side.

Striker Cameron Jerome finished with 18 goals, but the former Stoke and Crystal Palace striker has never got anywhere near to those heights in the Premier League.

Fellow forward Gary Hooper also struggled to make an impact two seasons ago when he was brought to the Premier League to score the goals to keep Norwich in the top flight, whilst Lewis Grabban and Kyle Lafferty appear to be more unknown quantities for the East Anglian side.

Norwich’s transfer strategy appears to again looks modest as it did two years ago when the Canaries were last in the top flight, especially compared to their relegation rivals this season.

The Canaries late run to the play-offs was expertly directed by Alex Neil, but vast majority of Neil’s inherited squad were shown to be inadequate and lacking of quality two years ago, something that does not look likely to change this time around.

The strength and ambition of both Watford and Bournemouth may add pressure on existing Premier League sides but overhauls by Aston Villa, Crystal Palace and Newcastle could see a far less open battle at the bottom of the table this time around, with Norwich well placed to return straight back to the Championship next season.

Recommended Football Betting Tips Back Norwich to be Relegated @2.10