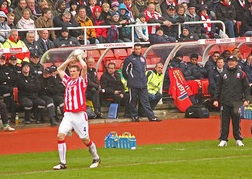 Manchester United extended their lead at the top of the table to three points following the Red Devils 4-3 victory at the Madejski Stadium.

Champions Manchester City could only manage a draw against high-flying Everton, whilst Chelsea suffered defeat at Upton Park.

Newcastle arrested their recent slide with a 3-0 victory over Wigan on Monday night, whilst Norwich’s superb run in the Premier League continued with a 2-1 victory over Sunderland at Carrow Road.

West Brom and Arsenal both slipped up at home, Tottenham secured an impressive victory away at Craven Cottage, but QPR could only find a point in Harry Redknapp’s first game in charge at Loftus Road.

This week our Premier League predictions come from the Midlands as in-form Stoke face Aston Villa.

Stoke’s unexpected victory at the Hawthorns gave the Potters their first away win of the season and Tony Pulis’ side are now chasing their fifth win in six games in the Premier League.

A victory for Stoke could send the Potters up to sixth in the table and the basis for Stoke’s success continues to be the defensive foundation of Asmir Begovic, Geoff Cameron, Robert Huth and Ryan Shawcross. Only Manchester City have a better defensive record than Stoke this season and the seven clean sheets in the Premiership is also a league best.

Peter Crouch should be fit to play despite losing some teeth, but it’s Stoke’s attack that continues to lack any bite. The Staffordshire club are averaging less than a goal a game and the suspension of Charlie Adam should further stifle the ammunition for the Stoke front line on Saturday.

Hosts Aston Villa have strung together a number of positive results recently, but the Villains still remain only two points off the relegation zone.

Villa have the second worst attack in the league and record signing Darren Bent continues to be frozen out of the first team by manager Paul Lambert.

Belgium international Christian Benteke has been a big plus point for Aston Villa since arriving from Genk and the summer signing  has settled quickly in the Premier League.

Villa have improved defensively in recent weeks and Matt Lowton looks increasingly accomplished at right back. Captain Ron Vlaar could also return from injury after missing the last two games in the Premiership.

Aston Villa have kept clean sheets in their last two games at Villa Park and the chance of a winter flurry of goals seems unlikely on Saturday.