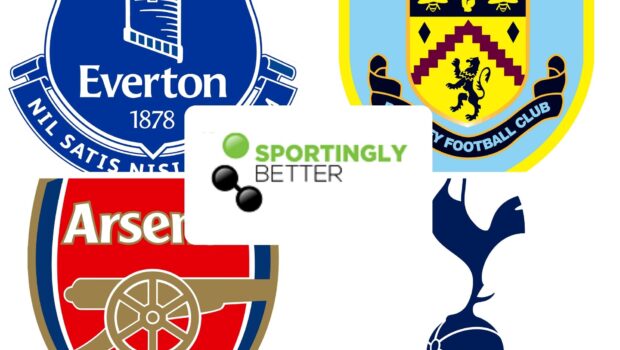 Sportingly Better brings you Premier League tips for this weekend in Matchday 28 action. We look at an interesting fixture at Goodison park, as well as the always intriguing London derby.

Everton’s top four aspirations took a hit last time out with an away loss to Chelsea. That result saw their three game winning run halted and Carlo Ancelotti’s men will be looking to rebound to keep pace in the race for Champions League places.

The Toffees do have a game in hand on the teams above them, but they can’t afford to lose any more ground. They host a tricky Burnley side who held them to a draw in the reverse fixture back in December.

Sean Dyche’s men have picked up points in six of their last seven matches, although five of those results have been draws. Despite their run, the Clarets sit just four points from relegation with 10 games to play.

So both sides with plenty to play for, but we can’t look past the home team in this one. Look for a low scoring 1-0 or 2-0 win for Everton.

The London derby is always a fixture to mark on the calendar. Traditionally dominated by the Gunners, an upturn in fortunes in recent years for Spurs has seen this fixture provide plenty of storylines from a betting perspective.

Arsenal remain stuck in what seems a never ending rebuilding phase. They are a puzzling side who have been marred in mid-table obscurity for most of the season.

Mikel Arteta’s men have shown glimpses of potential. Their recent results include a win over top four Leicester and progression to the last 16 of the Europa League. But, they’ve also been tripped up by the likes of Burnley and Wolves along the way.

Although the gap has closed slightly with the bookies, Tottenham remain the underdogs in this one, especially outside of the UK. Jose Mourinho’s men will be buoyed by their 2-0 win in the reverse fixture back in early December.

Getting back into the top four looks again unlikely, but Spurs are only five points back with a game in hand. They’re on a run of three straight victories and shouldn’t be lacking in motivation to get another one over their crosstown rivals.

Despite plenty of value in a Tottenman win, this fixture is too hard to call and we can’t discount the possibility of a draw. With a share of the points possible, looking for both teams to score also provides some value.