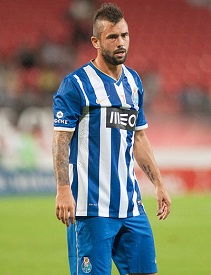 Selections from the Europa League make up the bets for this week’s football accumulator tips on Sportingly Better, returning odds of 6.45.

A penalty from Roman Eremenko gave 10-man Rubin Kazan a vital away goal in Spain, as the Russian side fought back from Didac’s early strike.

The Tatary have a terrific record in this competition having not lost any of their last 14 matches in the competition, but a lack of match practice due to the Russian winter break is still less than ideal practice for Vladimir Maminov’s side.

Visitors Real Betis remain stranded 11 points from safety in La Liga and the club’s priority to avoid the drop must be the Spanish club’s immediate concern.

Rubin Kazan have won six of their last seven matches at home in the Europa League and the tournament specialists should book their place into the last 16 of the competition.

Ajax will be looking to overturn a 3-0 deficit in the Europa League tonight, with a trip to the Red Bull Arena on Thursday.

Frank de Boer’s side are on a nine match unbeaten run on their travels, so the odds of 2.30 offered on the double chance market might encourage a few backers.

A 4-0 victory over AZ Alkmaar on Sunday will have rebuilt the side’s confidence, but Ajax have failed to score in five of their last seven matches in this competition.

Hosts Red Bull Salzburg have won their last nine matches in the Europa League, but it’s the Austrian side’s attacking verve that has really caught the eye, with a goal difference of plus 60 recorded domestically.

Red Bull Salzburg have scored two or more goals in five of their last six matches in this competition this season and another display of attacking confidence should be on show at the Red Bull Arena tonight.

Eintracht Frankfurt will be looking to preserve their away goal lead on Thursday, with Porto the visitors to the Commerzbank Arena.

The hosts have a number of injuries going into the match with Sebastien Jung, Sebastien Rode and Anderson all injured, whilst the versatile Marco Russ is suspended.

Frankfurt have won just two of their 11 games at home in the Bundesliga this season and the German outfit could adopt a cautious approach for the visit of Porto.

Paulo Fonseca’s side stumbled to a 1-0 defeat at home to Estoril on Sunday, a defeat that left the Dragoes a full seven points behind Primeira Liga leaders Benfica.

Elimination for Porto could cost Fonseca his post at the helm of the Dragons, but the visiting side should have enough quality to progress in front of a full crowd at the Commerzbank Arena tonight.