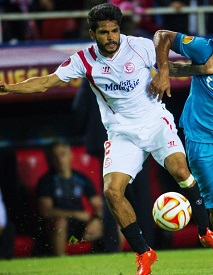 Selections from La Liga, Ligue 1 and the Bundesliga make up the betss in this weekend’s football accumulator on Sportingly Better.

Bayer Leverkusen have had back-to-back draws against Augsburg and Hamburg, which would’ve been teams they’d have expected to take more than two points against.

Bayer Leverkusen can’t afford to drop behind the leading pack much more otherwise they risk missing out on qualification for the Champions League next year.

Visitors Stuttgart handed Ingolstadt their first away defeat of the season but it was a poor game in truth. Stuttgart’s confidence may have improved, but that may well come crashing back down at the weekend when they travel to Leverkusen who have won four out of the last five meetings between the two sides.

Sevilla have severely underachieved this season,  as the Europa League holders have yet to see the summer recruits gel together.

Just as they looked to have found a winning formula after beating Barcelona 2-1, Sevilla then drew with Eibar. They sit in 13th position just two places behind Getafe and will be looking to string a decent run of form together.

The hosts have a good head-to-head record against Getafe having won the last four home games on the bounce, but replacing the goals of departed striker Carlos Bacca still needs to be addressed.

Sevilla have only suffered defeats at home against Atletico Madrid and Celta Vigo and the home side should push themselves through and pick up the win against Getafe this time around.

Nice have been in sensational form in recent weeks and have gained maximum points from their last four games; scoring 17 goals in the process.

It has fired them up into fifth position in Ligue 1 and believe it or not they’re the current top goal scorers in Ligue 1 with 24 goals, despite playing a game less than the rest of the division.

That form is in stark contrast to GFC Ajaccio who’ve hit the back of the net just four times in 10 league games.

Nice’s Hatem Ben Arfa has found the form that earned him a move to England and the former Marseille winger has scored an impressive times this season. This will be the first meeting ever between the two sides, but the form firmly sits with the visitors who are well priced to continue their form.