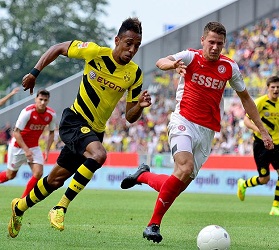 Tips from Ligue 1, the Eredivisie and Bundesliga provide the betting tips for this week’s football accumulator on Sportingly Better.

Nice can continue to build on their impressive season in Ligue 1 when they take on struggling Lorient. Hatem Ben Arfa scored a late brace to turn a 1-0 deficit at home to Angers into a 2-1 victory. That win closed the gap on Angers to just one point, who have been quite a tight unit at the back.

Visitors Lorient have suffered back-to-back league defeats to Bordeaux and Monaco, but they did manage to squeeze past Boulogne in the Coupe de France midweek. Lorient required extra time in that victory and given the form of the hosts, expect Nice to take the spoils this weekend.

De Graafschap’s misery show’s no sign of relenting, with the side sitting bottom of the Dutch Eredivisie with just eight points from 18 games. They did manage to get a very rare victory against Excelsior last time our however, which has given them a small glimmer of hope that they can somehow claw their way to safety.

Hosts Heracles sit comfortably in the Europa League positions and boast a tremendous record over Graafschap having won each of the previous five meetings.

Visitors Borussa Dortmund have played three friendlies over the past fortnight to keep things ticking over and they’ve had impressive performances in each of the matches.

Dortmund were somewhat concerned with former manager Jurgen Klopp targeting their current roster of players, but so far at least nothing has materialised and Dortmund still possess their star assets.

Dortmund haven’t managed a win away at Borussia Monchengladbach in any of the past five meetings, but goals look the order of the day, with two of the highest scorers in the league going head-to-head.