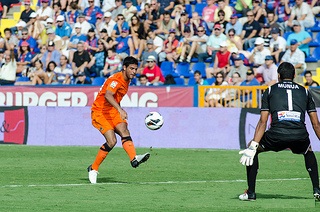 Selections from La Liga and the Football League make up the bets for this weekend’s football accumulator tips, returning odds of 7.39 on the treble.

Bolton’s 3-2 defeat at fellow play-off hopefuls Leicester may have dented Dougie Freedman’s chances of a top six finish, but the Trotters go into the weekend as one of the form sides in the Championship.

Bolton have injury concerns going into Saturday’s match with David N’Gog and Jay Spearing joining the likes of Mark Davies and Keith Andrews on the sidelines, but the Trotters have been strong at home winning each of their last eight matches at the Reebok Stadium.

Bolton have kept a clean sheet in each of their last five home matches in the Championship. Back a Bolton clean sheet at 2.62.

Opponents Middlesbrough have won just one of their last eight matches in the Championship and Boro’s play-off hopes this season have imploded after a run of 13 defeats in 18 matches since the turn of the year.

Middlesbrough have lost nine of their last 10 away matches in the Championship and hosts Bolton should claim all three points on Saturday to reinforce their play-off credentials.

MK Don’s 2-0 win away at Colchester on Tuesday rescued the Dons play-off hopes, but Karl Robinson’s side will need to pick up all three points on Saturday to keep that possibility alive.

Defenders Adam Chicksen and Dean Lewington should shake of their injuries for MK Dons, who have kept clean sheets in each of their last four games at Stadium MK.

Visitors Scunthorpe have lost their last seven away matches in League One and relegation to the fourth tier of English football looks a foregone conclusion for the Iron.

MK Dons have conceded just one goal in their last six meetings with Scunthorpe and the play-off chasing hopefuls look set to secure a nervy win against their poor travelling opponents on Saturday.

Real Sociedad maintained their four point cushion over Malaga and Valencia with a vital 2-0 win away at Rayo Vallecano
on Sunday.

The Txuri-Urdin have been a revelation this season and a Champions League finish looks likely for Phillipe Montanier’s impressive side, who are undefeated in their last 13 matches in La Liga.

Real Sociedad have scored two or more goals in six of their last seven matches in La Liga. Back Real Sociedad to score over 1.5 goals at 2.37.

Hosts Osasuna are only four points away from the bottom three and a lack of goals will need to be quickly addressed for los Rojillos, who have the worst attack in the league.

A win for Real Sociedad would take the visitors a step closer to securing a top-four finish and the Txuri-Urdin should pick up another impressive result against their shot-shy hosts on Sunday.