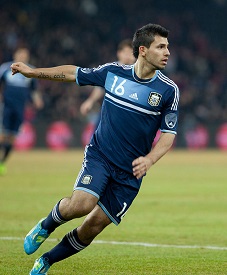 Second favourites Argentina will be looking to secure top spot in Group F, after being handed a relatively easy draw in the World Cup.

Argentina eased to the 2014 World Cup in Brazil, after topping the South American qualifying section with nine wins from 16 games.

Barcelona forward Lionel Messi somewhat presumably stole the show during qualification with 10 goals for his country, as Alejandro Sabella’s side fired in 35 goals.

Messi will be joined by Sergio Aguero and Gonzalo Higuain in an attacking 4-3-3 formation, as the second favourites in the outright betting market bid to secure top spot in Group F at the earliest opportunity.

Real Madrid midfielder Angel Di Maria will be one to watch at the 2014 World Cup, but question marks will be on Argentina’s defence, which managed to produce only four clean sheets during qualifying.

Winning Group F for Argentina should be virtually a mere formality and given the standard of the opponents in the group there may be plenty of backers for Messi (8.50) and Higuain (21.00) in the top goalscorer betting market.

Bosnia and Herzegovina qualified for their first-ever World Cup after winning eight of their 10 qualifying matches, but it was only goal difference that saved the nation from going through another agonising play-off.

Safet Susic’s side scored three or more goals in six of their 10 qualifiers; playingan expansive style of football, with Manchester City’s Edin Dzeko and Stuttgart’s Vedad Ibisevic scoring 18 of their country’s 30 goals.

A lack of strong opposition during qualification has perhaps masked Bosnia and Herzegovina’s defensive record, but the European side should be strong enough to beat both Nigeria and Iran to secure World Cup qualification.

Nigeria qualified for their fifth World Cup finals with relative ease, after picking up 12 points from six games.

The Super Eagles are arguably one of the most improved sides in international football over the last 12 months, with coach Stephen Keshi adopting a more energetic and youthful approach than many of his predecessors.

Victor Moses and Ahmed Musa will provide the pace needed to sting their opponents on the break, but it’s the goals of Emmanuel Emenike that could ultimately prove crucial for the African side.

A defensive-minded 4-2-3-1 will continue to be employed after conceding just seven goals in 16 matches, but a lack of sheer talent may ultimately leave the Asian qualifiers bottom of the group.

Iran’s threat from set-pieces may be their best chance of gaining a result at the World Cup, but Carlos Queiroz’s side are likely to spend most of the World Cup away from the opposition goals.