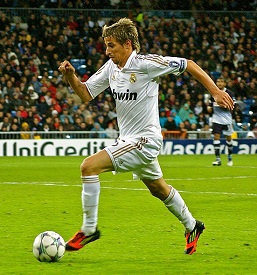 With just over three weeks to go until the January transfer window closes, Sportingly Better takes a look at some of the best value football predictions on who will be Fabio Coentrao’s next club.

A £27 million signing for Real Madrid in 2011, Fabio Coentrao has featured just twice for the Spanish side this season and the player will be keen to prove his fitness and form after spending most of the campaign as back-up to Marcelo.

News reports in the Daily Mirror suggest the left-sided defender can leave for as little as £12 million in January and that figure is likely to hold some appeal to the owners of Manchester United.

The Red Devils appeared poised to take the Portuguese left-back on loan from Real Madrid on Transfer Deadline Day, but his replacement Granada’s Guilherme Siqueira opted to join Portuguese side Benfica instead.

David Moyes’ repeated attempts to sign former player Leighton Baines over the summer showed that the club are clearly in the market for a left back, an intent that is set to intensify with first choice left back Patrice Evra’s contract set to expire in the summer.

Both Alexander Buttner and Fabio have failed to impress during their time at Old Trafford; performances that were summed up during Manchester United’s recent FA Cup defeat to Swansea.

Evra’s forays for the Red Devils over the years have been essential to Manchester United’s attacking contributions and a move for Real Madrid’s out-of-favour left back could begin to answer some of David Moyes’ creativity problems for the Premier League champions.

Coentrao’s versatility could see the full back being deployed ahead of Patrice Evra at least for this season, but a move to Old Trafford looks set to hold appeal for both the club and the player in the coming window.