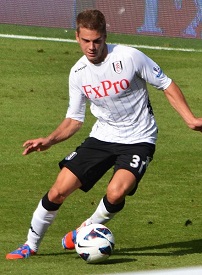 Season Match Betting – Back Fulham Not to be Relegated

Matej Vydra’s 86th minute strike at the Hawthorns denied Felix Magath a vital three points on his managerial debut, as West Brom fought back to earn a deserved point on Saturday.

Sportingly Better takes a look at Fulham’s chances of avoiding relegation this season, in what is expected to be one of the closest battles at the bottom of the table in Premier League history.

With just 11 games to go Fulham remain bottom of the Premier League four points adrift from safety, but the arrival of arguably Germany’s most successful coach has led to heightened belief in west London.

The highly disciplined coach won the league and cup double twice in two years with Bayern Munich, whilst a spell at Wolfsburg gave the club their first ever Bundesliga title. Magath rescued the likes of Werder Bremen and Frankfurt from danger, with the coach also saving Hamburg from relegation when they were bottom of the league.

Fulham have won just one of their last seven games in the league, but a total of 59 goals have been conceded this term and it is this defensive porosity that will need to be addressed first by Magath.

The experience of Brede Hangeland, Fernando Amorebieta, Sascha Reither and John Heitinga at the back will be vital if the club are to keep their Premier League opponents at bay, but experience alone will not guarantee Fulham an improvement in their defensive performances.

Extra training sessions have been introduced by the coach and although the extra work rate and effort has already begun to show on the pitch, it’s points that are Magath’s only concern as he bids to “play to win (and) not to impress the fans”.

Goals though will be important for the club and although the Cottagers did decide to loan out Bulgarian striker Dimitar Berbatov in January, the arrival of Kostas Mitroglou for a club record £12 million will be the spark Fulham hope will help them survive.

Premier League goals are a valuable commodity and although Berbatov delivered plenty of that during his time at Craven Cottage, the likes of Darren Bent, Clint Dempsey and Hugo Rodallega are all more than capable of weighing in. An expectation that is likely to be quickly introduced.

Fulham host rivals Chelsea this weekend and although the home side are not expected to pick up anything from the game, a further point on the board could prove crucial at the business end of the season.

Verdict
Football predictions on exactly who will be relegated this season remain thin on the ground, but there remains enough time, experience and quality within the Fulham ranks to turn their position around.

Just seven points separate the Cottagers in last place with 12th placed Swansea and although the Cottagers immediate fixtures are challenging, Felix Magath’s run-in consists of Hull at home, Stoke away and Crystal Palace at home.

Magath has showed previous form in rescuing the likes of Stuttgart, Frankfurt and Werder Bremen from relegation in the Bundesliga and the west London club look well priced to avoid being relegated this term.

Recommended Football Bets
Back Fulham to NOT be relegated @3.00