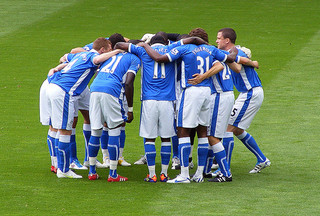 Only once in Premier League history have all three promoted teams been relegated the following season and the record book suggests that we should expect at least one of Reading, Southampton and West Ham to stay up this season.

Championship winners Reading are the favourites to be relegated and Brian McDermott’s side can be backed at 2.10 to lose their place in the Premier League. Backed by Russian Anton Zingarevich, Reading have on paper a far stronger side than last season and have invested notable sums of money on the likes of Chris Gunter and Adrian Mariappa, whilst free signings Danny Guthrie, Nicky Shorey, Gareth McCleary and Pavel Pogbrenyak clearly highlight the astute side of the club. Reading had only the joint fifth best attack in terms of goals last season, so the marquee signing of Pogbrenyak could be crucial. The Royals finished with the best defence in the league last season, but that back-line will be notably tested in the Premier League this time round.

Southampton have similarly invested over the summer and are another side that appear stronger on paper than last season and the Saints can be backed on football betting markets at 2.37 to be relegated this season. The signings of Jay Rodriguez, Steven Davis and Nathaniel Clyne certainly increase the quality on the pitch for Neil Adkins who with the likes of Rickie Lambert and Adam Lallana scored more goals than any other side in the Championship last season. Southampton scored over two goals a game at St Mary’s winning 16 of 23 matches and the difficult opening fixtures for the Saint’s make them a good back to lay option early on in the season.

Big Sam’s West Ham come in at 3.00 to be relegated from the Premiership this season. The Hammers have built on their impressive squad with the likes of James Collins, Modibo Maiga, Mohammad Diame and Alou Diarra. The loss of Rob Green was disappointing for West Ham who chose to replace the goalkeeper with Jussi Jaaskelainen who endured a torrid end to his Bolton career last season. Sam Allardyce will know all about Jussi and has the nous to once again establish himself as a Premier League manager. West Ham appear to have the best chance of survival out of all the promoted sides this term.

Wigan (2.50) seem to keep surviving in the top flight by the skin of their teeth, but there must be a time when even Roberto Martinez cannot save the Latics. Wigan have lost three of their most influential players this season with Hugo Rodallega moving to Fulham, Mohammad Diame joining relegation rivals West Ham, whilst Victor Moses looks almost certain to join the revolution at Chelsea. Ryo Miyachi may fill some of that void but Premier League survival may this time elude Martinez, who finished last season with a fantastic run of form.

The double loan signing of Belgium’s Romelu Lukaku and Yassine El Ghanassy will certainly strengthen the Baggies attack along with Swedish striker Marcus Rosenberg. The loss of Paul Scharner is a blow with the defender departing for the Bundesliga, but Steve Clarke should have enough about him as a number one to make a success of the Baggies season especially if he can reclaim the magic of Peter Odemwingie in attack.

The staunchest challenge is perhaps at the Liberty Stadium for Michael Laudrup. The departure of Joe Allen along with loan deals ending for Steven Caulker, Gylfi Sigurdsson and Josh McEachran have severely weakened the Swans with Ashley Williams, Scott Sinclair and Neil Taylor still the subject of transfer speculation. The signing of Spanish midfielder Michu may fill the void of some of the goals that Sigurdsson contributed, but Laudrup will do well this season to retain Premier League football in South Wales.

The Canaries have largely the same squad, with a few astute signings by the new manager. The challenge for Chris Hughton will be to get out of Norwich’s over-achieving squad what Paul Lambert achieved in his three years at Carrow Road. The signings of Whittaker and Turner have clearly strengthened the Canaries defence; an area of the squad which must have been a concern for Hughton.