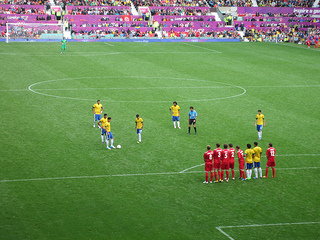 Brazil remain strong favourites for the gold medal with Spain already knocked out after Luis Milla’s side suffered back to back defeats in Group D going into the last game of the group stages.

After hitting three goals in both games the impressive Brazilian attack looks likely to add to their goal tally in the early kick-off against New Zealand. Five different goalscorers for Brazil highlights the mood the free-scoring Olympic team are in with Santos’ Neymar and Chelsea’s new signing Oscar both impressing. Expect changes in the Brazil U23 line-up with the likes of Porto’s Alex Sandro and Danilo yet to feature.

New Zealand look unlikely to progress, with a 1-1 draw against Egypt the only point for the Australasian side at the London 2012 Olympic games.

With the likes of Leandro Damiao, Oscar, Lucas, Neymar, Pato and Hulk in attack, finding value in the goals market looks best placed for Wednesday’s short-priced favourites who look set to stake their claims even further for Olympic gold.

Team GB fired their way to a 3-1 victory over the United Arab Emirates last time out with Daniel Sturridge’s deft chip the pick of the goals. Ryan Gigg’s guile and experience was telling, in what was at times, a less than convincing win for Stuart Pearce’s side.

Opponents Uruguay also secured victory against UAE, but a 2-0 defeat to Senegal has left Group A wide open going into the final game of the group stages, with the South Americans yet to keep a clean sheet at the Olympic Games.

Great Britain U23 too have not registered a shut-out and the arrival of Luis Suarez, Edinson Cavani and Gaston Ramirez will be worrying for the likes of Tomkins and Richards who have struggled at this summer’s tournament. The lack of a natural holding midfielder is worrying and this will again heighten the chance of Team GB conceding. Both sides need a positive result to guarantee progression through to the knockout stages of the 2012 Olympic Games, with both nations likely to find the net this evening.