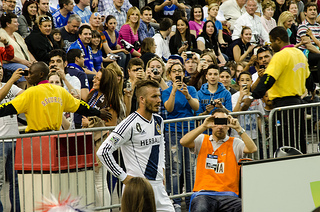 David Beckham’s decision to leave the LA Galaxy has prompted a number of clubs from all over the world to clamour for the superstars signature and last week Beckham revealed that he had already “been offered some quite exciting options”.

Beckham’s decision to leave the LA Galaxy has not closed the door on the MLS and the prospect of joining another franchise like the New York Red Bulls remains an option. The former England international has an option to become owner or part owner of a MLS club and the prospect of club ownership is one that clearly excites the midfielder.

A move to France however seems far more likely with big spending Monaco and PSG amongst the favourites for Beckham’s signature.

Ligue 2 leaders Monaco have been the most vocal in their attempts to sign Beckham and backed by Russian billionaire Dmitry Rybolovlev, Monaco would be able to fund one of the most attractive financial packages for the much-coveted player. The prospect of second division football does not provide the footballing challenge that Beckham has naturally seeked throughout his career, but the lifestyle on the French coast would appeal to wife Victoria and the family.

PSG have been in for Beckham before but officially the line from Paris is that PSG will not be bidding for Beckham this time around. PSG coach Carlo Ancelotti managed Beckham during his time at AC Milan and an offer from PSG would also fulfil the midfielders desire of playing Champions League football. PSG remain in the hunt for Le Championnat and the chance of winning a Ligue 1 medal remains a possibility for Les Rouge et Bleu. The connections to London also appeal with a trip to the English capital taking less than three hours.

Beckham also has options in England, but the chances of the former Manchester United player continuing his career in the Premier League appears unlikely.

QPR manager Harry Redknapp has not been shy about his admiration for Beckham and owner Tony Fernandes is likely to sanction a move for the 37-year old midfielder. The arrival of Beckham would undoubtedly provide a much needed boost for the relegation threatened side who have an uphill task of avoiding the drop this season.

A better match for Beckham remains West Ham, with the former England captain having been born in nearby Leytonstone. The probable move to the Olympic Stadium next season would also create an apt closing chapter to Beckham’s story, who was so pivotal in bringing the Olympic Games to London. West Ham’s owners though, appear reluctant to invest in a player in his late 30’s.

Australian side Melbourne Heart are heavily fancied to secure Beckham’s services and the clubs owners are leaving no stone unturned in their efforts to land the midfielder.

Every detail of Melbourne Heart’s proposal has been fully considered and a move to Australia would appear to suit both player and family. Despite the arrivals of Emile Heskey and Alessandro Del Piero, the arrival of Beckham to the A-league would be a considerable boost to the sport and raise the profile of Australia’s soccer league.

The strength of Beckham’s affinity for Manchester United leaves a return to England unlikely and with the family keen to maintain ties with both England and Los Angeles, a move to PSG seems to fit all the criteria, as Beckham chases his latest footballing challenge.

Recommended Bets
PSG to be David Beckham’s next club @4.50

One Response to Next Club Betting – David Beckham