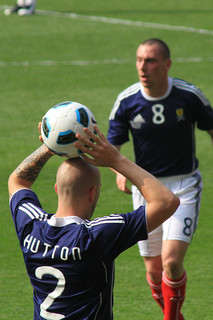 International football makes a return to our screens tonight and today’s football tips include a friendly victory for Gordon Strachan in his first game in charge as Scotland manager.

Scotland coach Gordon Strachan kicks off his reign as manager with an inconspicuous friendly against minnows Estonia.

Scott Brown has been given the armband for today’s match, with the player in “fine form” according to his manager and the 27-year old midfielder has enjoyed a strong campaign with Celtic in the Champions League this season.

Scotland have never lost against Estonia winning five of the seven games that have been played, including a 1-0 victory the last time the two sides met.

Gary Caldwell and Grant Hanley have both been withdrawn from the squad so Strachan will need to choose between Charlie Mulgrew, Andy Webster and Christophe Berra in the centre of defence.

Midfielders Ross McCormack and James Forrest have also pulled out, but in Jordan Rhodes and Steven Fletcher, Scotland have a strike-force, which should be more than enough for their Estonian opponents. Rhodes in particular goes into tonight’s game in fine form after scoring eight goals in his last six appearances for Blackburn in all competitions.

Scotland have lost only four of their last 25 games on home soil and the 1.57 on a home win looks to provide more than enough value tonight.

Much fancied Belgium enjoyed a good run of results last year, but a 2-1 defeat against Romania in their last friendly showed that the Red Devils are far from the finished side.

Belgium have lost just two of their last 10 games on the international stage and the Premier League laden squad remains full of burgeoning talent.

Christian Benteke has been in good form for Aston Villa and is again expected to lead the line, but Manchester City captain Vincent Kompany has been ruled out, whilst Everton’s Marouane Fellaini and Arsenal’s Thomas Vermalen are both doubtful.

Opponents Slovakia were lacklustre in their last friendly losing 3-0 to the Czech Republic last time out, but the Repre do boast talented individuals in Napoli’s Marek Hamsik and Brescia’s Vladimir Weiss.

Belgium will again be well backed in the football betting markets, but the promising Red Devils should have too much fire-power for Slovakia today.