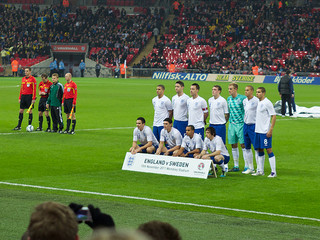 Roy Hodgson’s England have been dealt a number of injuries ahead of this summer’s European Championship as the Three Lions look to overcome France, Sweden and co-hosts Ukraine in Group D.

France narrowly secured automatic qualification after a 1-1 draw with Bosnia and Herzegovina in the final group game of qualification. Les Bleus suffered a surprise defeat against Belarus and also drew against the minnows in a less than impressive campaign.

Laurent Blanc’s side picked up six clean sheets during the qualifiers and did not concede more than one goal in any single game. Blanc has benefited from picking a steady side with the likes of Lloris, Rami, Malouda, M’Vila and Nasri all regulars for Les Bleus. In attack France have named Karim Benzema of Real Madrid and Oliver Giroud who finished top goal scorer in Ligue 1 in a championship winning season for Montpellier.

France have been hugely disappointing in the last two international tournaments where they did not win a single game and were eliminated at the group stage, but Laurent Blanc’s side look set to do markedly better at this summer’s European Championship.

Hodgson overlooked experienced centre-half Rio Ferdinand and even snubbed the Manchester United defender for Martin Kelly when Gary Cahill was withdrawn from the squad. Hodgson has lost Barry, Ruddy and Lampard and is without Wayne Rooney for the first two games in Group D following suspension.

England qualified in unbeaten fashion winning five of eight qualifiers in a group that contained Switzerland, Wales and Montenegro. The Three Lions scored twice or more in six of eight games, whilst defensively England racked up five clean sheets.

Roy Hodgson appears to have organised the England side more than his predecessor, key absences and a lack of cutting edge early on may impact on England’s chances this summer, although as Greece showed eight years ago a tight rearguard can take a side all the way.

Co-hosts Ukraine secured qualification for the European Championships for the first time in their history, but little is expected of Zhovto-Blakytni during this summer’s tournament.

Ukraine have played ten international friendlies since August, which also included a 1-0 loss to group opponents Sweden. In truth Ukraine have been lightly tested, but a 3-3 draw with Germany in November held some promise. Oleh Blohkin’s side lost four of their ten friendlies, including defeats to the Czech Republic, Uruguay and Austria.

Dynamo Kiev strikers Artem Milevskiy and Andriy Yarmolenko contain plenty of firepower, whilst Dnipro’s Yevhen Konoplyanka maybe one to watch in midfield, but the worry for Blohkin is defensively with the Ukraine conceding two or more goals in five of their last ten internationals.

Sweden picked up 24 from 30 points during qualification in a group that also contained Holland. Erik Hamren’s side picked up eight victories from the ten group qualifiers and even defeated the Dutch on the final game of qualification.

Sweden are more of an attacking force than previously and produced 31 goals during qualification and only Germany and Holland could better that tally. AC Milan’s Zlatan Ibrahimovic is Hamren’s class act but Kim Kallstrom of Lyon is a highly gifted midfielder and was responsible for ten of Sweden’s 31 goals (seven assists and three goals). Meanwhile Seb Larsson’s delivery and set pieces could prove pivotal on the international stage.

Sweden have been eliminated from the group stage in two of the last three European Championship’s and Hamren’s side will do well to qualify from Group D.