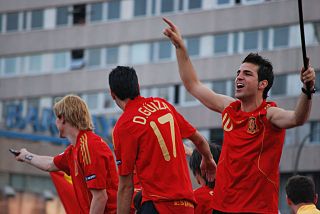 Reigning European Champions Spain look the team to beat in Group C, with controversy-hit Italy, Croatia and the Republic of Ireland all hoping to qualify.

Spain eased through qualification with a 100% record and Vicente Del Bosque’s side are strong favourites to finish top of Group C.

The eight victories during qualification brought 26 goals and the Spanish scored at least twice in every one of their group qualifiers. David Villa scored seven goals during qualification so the absence of the Barcelona striker is clearly a blow for Del Bosque. Fernando Torres and Fernando Llorente will replace Villa who was the top scorer at the European Championships four years ago.

Spain recorded just three clean sheets during qualification and the loss of Carlos Puyol will be a blow to the champions, with the Barcelona defender a leader both on and off the pitch for La Roja.

Cesare Prandelli has included World Cup winners Buffon, De Rossi and Pirlo in a traditionally experienced squad with only Mario Balotelli, Fabio Borini and Angelo Ogbonna under the age of 25.

Controversy, allegations and conspiracy has gripped Italian football with Domenico Criscito being removed from the squad. On the pitch the worry for Italy is going forward with Borini, Giovinco and Balotelli largely untested on the international stage. The Azzurri also lost 3-0 to Russia recently to raise further question marks over the state of the Italian national football team.

Croatia beat Turkey 3-0 on aggregate during the Euro 2012 play-offs after narrowly missing out on automatic qualification in Group F.

Slaven Bilic’s side won seven of ten qualifiers, although two losses away to Greece and Georgia were unexpected considering the talent at Bilic’s disposal. The Premier League are well represented with the likes of Modric, Krancjar and Jelavic, whilst captain Darijo Srna along with Olic, Mandzukic and Eduardo highlight the strength in attack for Bilic. Croatia scored 21 goals during the qualification stage with Mandzukic and Eduardo contributing with three goals each.

Croatia reached the quarter finals four years ago and did not lose a single game. A penalty defeat to Turkey eliminated Bilic’s side, but Croatia will do well to match that this time around.

Giovanni Trappatoni named a largely experienced squad for the European Championships with the likes of Given, Dunne, O’Shea, Duff, Hunt, Doyle and Keane all called up by the Italian.

Ireland finished two points behind Russia during qualification winning six of ten qualifiers and losing just the once. The play-off draw was kind to the Irish who promptly beat Estonia 5-1 on aggregate. Ireland’s record is impressive and the Irish have scored two or more goals in six of their ten group games, whilst five clean sheets being recorded at the back.

Ireland have not qualified for the European Championships since 1988 and the opening game against Croatia could prove crucial if Ireland are to reach the knockout stages.