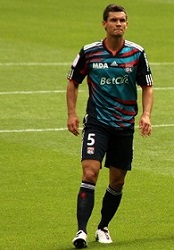 Friday’s news that Southampton have signed defender Dejan Lovren from Lyon represents the Saints first foray into the transfer market this season, as manager Mauricio Pochettino attempts to overcome his side’s defensive issues at the back.

Sportingly Better takes a look at Dejan Lovren’s arrival to the Premier League and his potential fantasy football value next season.

Having initially come through the ranks at NK Karlovac, Lovren signed for Croatian side Dinamo Zagreb, but back-to-back loan spells with second division side Inter Zapresic gave the defender his first taste of regular football.

Lovren won the Druga HNL Championship during his first season on loan with the Keramicari, but his return to Zagreb the following year saw the highly rated defender lift both the Croatian Cup and the Prva HNL Championship.

French giants Olympique Lyonnais were quick to spot the central defender’s potential and the stopper completed a €8.5m deal in 2010, but it wasn’t until the following season that Lovren began to make inroads into the Lyon starting eleven, going on to form an effective partnership with Brazilian defender Cris.

Lovren lifted the Coupe de France with Lyon during his final year with the club, but three red cards and a poor lack of discipline saw the defender feature just 18 times in the league last season.

Lovren has represented his country from Under 17 to Under 21 level, whilst international goals against Malta and Wales for the senior side highlight the defender’s eye for goal from set-plays.

Southampton manager Mauricio Pochettino will likely name Lovren as one of his first choice centre backs next season and although the Croatia international can also play either side of the defence; the presence of emerging full backs Nathaniel Clyne and Luke Shaw should see Lovren cement a permanent place in the heart of the Saints back-line.

Only four clubs in the Premier League conceded more goals than Southampton (60) last season, but the Saints did show signs of some more encouraging defensive displays towards the end of the campaign; conceding just nine goals in the final 10 gameweeks.

A price tag of around £4.5m-£5.0m will be the predicted value of Southampton’s big-money arrival when the Premier League player list is released next month and if Lovren can improve on his disciplinary record, then the defender could represent a strong budget buy for fantasy managers next season.