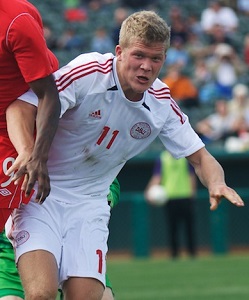 Cardiff City completed their first signing of the summer on Monday, with the capture of FC Copenhagen striker Andreas Cornelius for a club record fee of £7.5m.

Sportingly Better takes a look at Andreas Cornelius’ arrival to the Premier League and his potential fantasy football value next season.

Having only been handed his senior debut last year, Danish striker Andreas Cornelius quickly established himself as a first-team regular at FC Copenhagen last season, as the Byens Hold scooped the Danish Superliga title.

Cornelius finished the 2012/2013 season as the league’s top scorer; firing in 18 goals in just 32 appearances, in what was the player’s first full season at the club.

Cornelius’ game appears to be perfectly suited to Mackay’s approach and the Denmark international could feature heavily for Cardiff as the lone forward, in the Scottish manager’s preferred 4-5-1 formation.

Cardiff’s opening schedule in the Premier League may deter initial suitors, but despite an expected price tag of just £5.5m, some managers may feel it is too much of a risk to transfer in last season’s Danish top goalscorer, after only one full season of top-flight football.