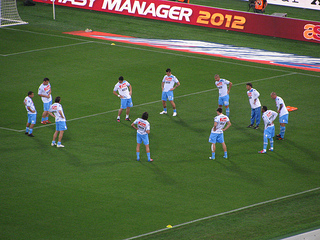 Sportingly Better picks out the best bets in this season’s UEFA Europa League competition including an each-way play in the outright betting market and a group betting selection.

Atletico Madrid have put themselves in a decent position going into the final two games of the group stage and currently sit level on points with leaders Plzen.

Last week’s second string selection at Academica highlighted the growing importance of La Liga for Diego Simeone, whose side remains in touching distance of runaway leaders Barcelona. Qualification to the knockout stages is almost assured, with the 2011 winners yet to demonstrate Colombian striker Radamael Falcao’s ability in this competition.

Simeone has undoubted quality in his ranks at the Estadio Vincente Calderon, with Emre and South American’s Cristian Rodriguez and Diego Costa performing well in the group stages, but the focus on La Liga and Barcelona may prove a costly distraction for Atletico Madrid’s hopes of retaining the trophy.

Inter Milan top Group H with 10 points, but backers will be weary of favouring the Nerazzurri with Stramaccioni’s side chasing Juventus in Serie A.

Nine goals in four games highlights Inter’s fire power up front with Rodrigo Palacio hitting five goals for the Italian club. Colombian Fredy Guarin has excelled in this season’s competition and his four assists highlights the growing influence the former Porto midfielder has on his new club.

Inter have already secured qualification and Stramaccioni may choose to use the remaining group games to assess his squad further, but similarly to Atletico Madrid the domestic distraction of a league title may be too much of a negative impact for Inter’s chance of European silverware this season.

Anzhi’s 1-0 victory over Liverpool left Guus Hiddink’s side top of Group A with just two games to go and the Russian side are favourites ahead of Liverpool and Young Boys to progress.

Dikaya Divisiya are heavily backed by Russian billionaire Suleyman Kerimov and the likes of Samuel Eto’o, Christopher Samba, Yuri Zhirkov, Lassana Diarra and Lacina Traore have all been brought into the club since the takeover.

The break in the Russian calendar will see Anzhi enjoy plenty of time for preparation and rest in the new year and with Hiddink at the helm, a run in the Europa League looks likely for the ambitious Russian club.

Tottenham manager Andre Villas-Boas has history in the Europa League after famously lifting the trophy for Porto two years ago.

Villas-Boas has already declared his intent in the competition, something that the players have taken on-board with Garteh Bale again excelling on the continent.

Spurs remain unbeaten in the tournament and the strength in depth at the London club make Tottenham an attractive offer for backers. The pace and width of Bale and Aaron Lennon out wide set up Spurs to exploit teams on the break and with Jermain Defoe and Emmanuel Adebayor up front, the Europa League remains a realistic proposition for Villas-Boas.

The Europa League is arguably Liverpool’s lowest priority this season, with the manager and board keen to improve The Reds’ domestic standing in the Premier League.

Brendan Rodgers has used the competition as an opportunity to develop his young talent and the likes of Raheem Sterling, Suso and Andre Wisdom have all come through to feature in the Premier League.

The lack of depth and quality in the Liverpool side is concerning with the Merseyside club over-reliant on forward Luis Suarez and The Reds’ opportunity to develop young talent in the Europa League look likely to end sooner rather than later.

The Azzurri’s 4-2 win over group leaders Dnipro highlighted the standing and quality in Walter Mazzarri’s side and Napoli’s record in Naples should see the Italian club go far in the tournament this year.

German side Bayer Leverkusen (23.00) are yet to concede a goal in the Europa League and Sami Hyypia’s improving side have been solid at the back with Gonzalo Castro and Philipp Wolscheid excelling in defence and Lars Bender impressing in midfield.

The Werkself squad is full of emerging talent with Andre Schurrle the latest up and coming Germany international and Bayer Leverkusen should be able to make a strong claim for this season’s trophy.

Lyon (19.00), Lazio (21.00) and Rubin Kazan (26.00) remain solid choices, with Stuttgart (51.00) interesting outsiders, but this year’s Europa League predictions remain wide open, with domestic distractions for many of the tournaments favourites.