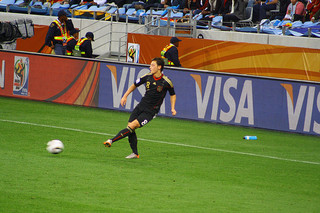 Germany come up against Italy in the second of the semi-finals with both teams one win away from the Euro 2012 final in Kiev.

Germany are the only side to have a 100% record at the European Championships and even the rotation of the front three against Greece in the quarter-finals did little to hold them back. After the 4-2 victory Loew declared that ‘the time was ripe to do something different’ and the German’s gamble payed off with Reus and Klose both finding the net. Reus was impressive down the right and Borussia Dortmund’s new signing may have earned a starting place in Warsaw on Thursday. The real selection for Loew will be at the focal point of the attack with Klose experienced at playing against Italian defences week in and week out at Lazio, although benching Mario Gomez this time would be a bold decision by Loew.

Italy look set to welcome Giorgio Chiellini at the back and the Juventus defender’s presence will provide a much needed boost for the Azzurri. Italy had to endure a further 30 minutes of action after failing to see off England during the regulation 90 minutes and fatigue for the Italians will likely be a factor, especially with Prandelli‘s side playing two days later than Germany did against Greece.

Pirlo remains the class act for the Azzurri, but Marchisio, Nocerino and Montolivio are all capable in the midfield but the Italians tend to play compact and narrow and the wide and energetic play of Reus and Podolski along with the overlapping of Lahm could prove fruitful.

Italy have had more efforts on goal than any of the semi-finalists, but the Azzurri have scored the fewest amount of goals with Italy’s wastefulness all too apparent against England. Coach Cesare Prandelli may choose to recall Di Natale in place of Mario Balotelli in attack.

Germany have looked the most impressive nation at Euro 2012 so far and have scored two or more goals in the last three games and given the fatigue factor that the Italians will undoubtedly feel, Germany should be too strong in attack and  book their place in the Euro 2012 final.