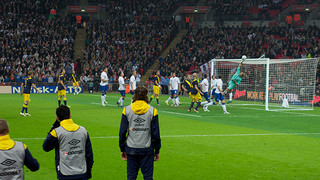 A draw for England will be enough to see the Three Lions qualify today at the expense of co-hosts Ukraine in the final game of Group D.

England came from 2-1 down to beat Sweden 3-2 last time out with Theo Walcott providing the impact and inspiration from the bench. Manager Roy Hodgson looks set to recall Wayne Rooney after the Manchester United completed the second of his two game suspension. Andy Carroll looks almost certain to make way, with the Liverpool striker serving his purpose in the air against a susceptible Swedish defence. The contribution of Walcott has pressed his claim to start the match in Donetsk, with James Milner likely to make way. The Manchester United connection of Young, Welbeck and Rooney will also be a consideration for Roy Hodgson.

Ukraine have a concern over striker Andriy Shevchenko, but the captain will be desperate to play knowing a win would see his country qualify for the quarter finals. Four of Ukraine’s seven shots that have been on target have come through Shevchenko and the experienced striker will be key for Ukraine.

With Rooney returning after suspension, England should have too much for Oleg Blohkin’s side and seal their passage into the quarter finals of the European Championship.