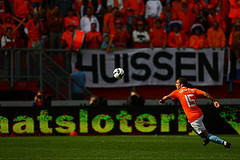 Holland find themselves in danger of exiting Euro 2012 after suffering a 1-0 defeat to Denmark in the opening group game.

Bert Van Marwijk’s side are now just 2.50 to qualify from Group B and the Netherlands were hugely disappointing and wasteful in front of goal against the Danes. The best form of defence for Holland should be their attack, but Van Marwijk plays with two holding midfielders in De Jong and Van Bommel and not losing the game will be paramount.

Klaas-Jan Huntelaar is pushing for a start after Robin Van Persie and Ibrahim Affelay both disappointed against Denmark where 28 shots were registered on goal. Defender Joris Mathijsen however could return at the back, which would be a boost for the Dutch.

The last time the Netherlands exited the group stage was in 1980, where they suffered defeat to West Germany and the Dutch will be weary of a similar exit.

Germany were efficient in their victory over Portugal and Muller, Podolski and Ozil will have to be watched closely by the Dutch. Joachim Loew has a fully fit squad to choose from for their second game in Group B and with the attacking tridents on offer for both sides, goals look probable in Kharkiv later today.