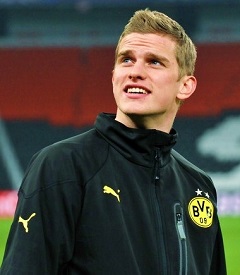 It’s Matchday three in the UEFA Champions League this week, as Chelsea, Arsenal and Manchester United all bid to maintain their good starts in the competition.

High-flying Arsenal welcome Borussia Dortmund to the Emirates Stadium on Tuesday, with the Gunners eager to maintain their 100% record in the competition.

Arsenal have won each of their last five matches in the Champions League and a sixth successive victory would leave the north London side in excellent shape to qualify as group winners this year.

The Gunners have been in impressive form domestically, winning six of their opening eight matches in the Premier League, with first-team regulars Theo Walcott, Lukas Podolski, Alex Oxlade-Chamberlain and Thomas Vermaelen still sidelined.

Record signing Mesut Ozil has settled quickly into English football, with three goals and four assists in seven games, whilst Aaron Ramsey‘s explosive start to the season has been an unexpected bonus for manager Arsene Wenger.

Opponents Borussia Dortmund bounced back from their opening-day defeat in Naples by beating Marseille at the Westfalenstadion last time out, but defeat on Tuesday would leave Jurgen Klopp with plenty of work to do in Group F.

Dortmund continue to be without first choice full backs Lukasz Piszczek and Marcel Schmelzer, but the return of defender Mats Hummels from suspension is a plus.

The arrivals of Pierre-Emerick Aubameyang and Henrikh Mkhitaryan over the summer have reinvigorated Klopp’s options in attack, whilst Polish striker Robert Lewandowski continues to flourish up front at this level.

Dortmund have managed to keep just three clean sheets away from home all season and Arsene Wenger’s in-form side are likely to test their German opponents on Tuesday.

Recommended Bets
Both teams to score @1.50

Defeats against Arsenal and Borussia Dortmund have left Marseille on the edge of European elimination in Group F, as second-placed Napoli travel to the Stade Velodrome.

Marseille have won just two of their last nine matches in all competitions and with l’OM bottom of Group F and a full seven points adrift of leaders PSG in Ligue 1,the future of head coach Elie Baup looks far from certain.

The likes of Mathieu Valbuena, Andre Ayew and Andre-Pierre Gignac do at least provide Baup with a level of danger in front of goal, with Marseille having scored in every game at home this season.

Opponents Napoli were unlucky to come away from the Stadio Olimpico empty-handed on Friday, with coach Rafa Benitez charged with turning the Italian side into a force both domestically and in Europe.

Partenopei are sweating on the fitness of Gonzalo Higuan in attack, but Lorenzo Isigne looks likely to displace Dries Mertens out wide, with Blerim Dzemaili coming into the middle of midfield.

Marseille have lost each of their last five matches in this competition and the high-flying visitors look well poised to come away with all three points and confirm their credentials as potential knock-out opponents in the Champions League this year.

Group A leaders Manchester United will be looking to put their poor start to the season behind them, with Real Sociedad the visitors to Old Trafford.

The hosts have won just three of their opening eight games in the Premier League this term and defeat on Wednesday would significantly intensify the pressure on manager David Moyes.

Centre backs Nemanja Vidic and Rio Ferdinand have both been ruled out, so Jonny Evans and Phil Jones are likely to continue their partnership at the back, following last weekend’s 1-1 draw with Southampton.

Opponents Real Sociedad have made an equally poor start to the season, winning just two of their opening nine games in La Liga, but last Saturday’s 2-1 victory away at Valencia will have given Jagoba Arrasate’s men renewed hope going into this match.

Former Arsenal striker Carlos Vela has struggled to recapture his form from last year, but the return of winger Xabi Prieto from injury will be a boost to the visitors.

Manchester United put four goals past Bayer Leverkusen in their previous game at Old Trafford and the Premier League champions should have enough to power their way to victory on Wednesday.