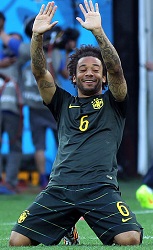 Brazil will be looking to bounce back from their humiliating 7-1 defeat in the semi-finals, with Netherlands the opponents in the third-place play-off tonight.

Sportingly Better takes a look at the best value football betting tips this weekend ahead of tonight’s match in Brasilia.

World Cup hosts Brazil will be looking to restore some much needed pride, after their semi-final debacle at the hands of Germany on Tuesday.

The Selecao will crucially welcome back Thiago Silva from suspension and the return of the PSG defender will should provide Luiz Felipe Scolari’s side with some much needed command and defensive attention at the back, after a catastrophic display last time out.

Brazil have won two out of their previous three appearances in the World Cup third-place play-off, but Scolari is expected to make a raft of changes with the likes of Jo, Willian and Ramires coming in for the disappointing Fred, Hulk and Bernard.

The South American side have had more shots on goal (76) than any other country at the World Cup, but the effect of losing Neymar may again be felt here.

Opponents Netherlands have spoken about the irrelevance of a third-place play-off match at the World Cup, with coach Louis van Gaal expected to make wholesale changes to his line-up with Memphis Depay, Klaas-Jan Huntelaar and Michel Vorm all expected to start.

The Oranje have lost both of their two previous appearances in the World Cup third-place play-off matches and a lack of interest this time around could leave the hosts with something to cheer at this weekend.