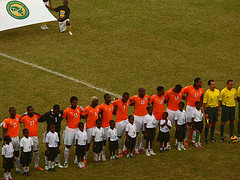 It’s been just one year since Zambia won the Africa Cup of Nations following a penalty shoot-out victory over Ivory Coast, but it is the Elephants that go into the 2013 tournament as heavy favourites.

Hosts South Africa will be desperate to rebuild their reputation following a disappointing performance at the last World Cup, whilst Ghana will be hoping to go further than their fourth placed finish last year.

Morocco, Nigeria and Algeria all have claims to win the trophy, but the biggest prize in African football is renowned for springing a few surprises.

Sportingly Better picks out the best bets and football predictions for this year’s Africa Cup of Nations.

Ivory Coast are clear favourites for the 2013 Africa Cup of Nations, but the Elephants‘ golden generation is fast running out of time to lift Africa’s most prized trophy.

The likes of Didier Drogba, Yaya Toure, Salomon Kalou, Arouna Kone and Didier Zokora will all be present in South Africa, aiming to go one better than they did last year after slipping up in the final against unfancied Zambia.

Much has been expected of Ivory Coast since reaching their first ever World Cup appearance in 2006, but the highest ranked African nation in the FIFA rankings have inevitably fallen short.

Last year the Elephants lost on penalties to Zambia; a defeat that was made worse by the fact that Drogba missed a penalty in normal time. The 2006 Africa Cup of Nations saw another penalty shoot-out defeat as Egypt showed the stronger nerve.

Ivory Coast’s squad is laden with talent and experience and Sabri Lamouchi’s side have been rightly billed as pre-tournament favourites, but it’s often the smaller, more unfancied nations that show a lot of togetherness, who go all the way in this competition.

Backing the Elephants to win the tournament at anything around 3.00 would represent decent value in the football betting markets, with Drogba desperate to make amends, in what could be his last appearance in the competition.

Second favourites Ghana have not won the competition since 1982, but the Black Stars have finished third, second and fourth in the last three tournaments.

The absence of Andre Ayew is a big blow for Ghana, who missed a deadline of having the striker’s hamstring assessed by medical staff, but Richard Boakye and Asamoah Gyan will both be hoping to fill the void left by the talented Marseille forward.

The engine room as always remains crucial for the Black Stars and the likes of Derek Boateng and Kwadwo Asamoah will be key in the centre of midfield for Ghana.

Rising star Christian Atsu could make a big impact in South Africa and it was the Porto winger’s goal in Accra that started Ghana’s successful route to the Africa Cup of Nations.

Coach James Kwesi Appiah is a relative unknown, but the Black Stars and their coach might fancy their billing as underdogs in South Africa.

Hosts South Africa will be desperate to put their disappointing showing at the 2010 World Cup behind them and the Bafana Bafana may quietly fancy their chances this time around on home turf.

Coach Gordon Igesund has picked a side largely based in South Africa and the Kaizer Chiefs contingent of goalkeeper Itumuleng Khune, defenders Tsepo Masilela and Siboniso Gaxa, midfielders Siphiwe Tshabalala and striker Bernand Parker will form a key part of the Bafana Bafana squad.

South Africa did not qualify for the last two tournaments and exited at the Group Stage in the three tournaments prior to that absence, so the recent tournament record does not bode well for Igesund, who will have to endure the added pressure of being the home nation.

Outsiders Morocco come off the back of winning the Arab Nations Cup in 2012 and the Lions of the Atlas have a cohesive and gifted squad under coach Rachid Taoussi.

The Premier League’s Marouane Chamakh and Adel Taarabt have both been overlooked,  but Aston Villa’s Karim El Ahmadi and Liverpool’s Oussama Assaidi are included.

France based players Abdelhamid El Kaoutari and  Younes Belhanda of Montpellier are both included, whilst Udinese’s Mehdi Benatia is more than capable at centre-half.

Although appearing in their 15th Africa Cup of Nations, the Lions of Atlas have lifted the title only once in their history, but Taoussi’s cohesive outfit could be one to watch in South Africa.

Recommended Bets
Morocco to win Group A @3.00
Morocco to reach the final @5.00
Ivory Coast to win the Africa Cup of Nations @2.75