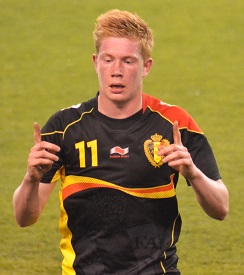 Belgium will be looking to continue their ascent up the football ladder, with Russia, South Korea and Algeria the opponents in Group H.

Belgium produced an emphatic unbeaten run during qualification picking up seven consecutive wins in the process, as the Red Devils secured their qualification for the 2014 World Cup.

From 200/1 outsiders to fifth favourites at 20/1, Marc Wilmot’s side remain one of the most emerging names in world football, with the likes of Eden Hazard, Vincent Kompany, Romelu Lukaku and Thibaut Courtois just some of the stars in their line-up.

Belgium’s ‘golden generation’ of players have to travel just 435 miles for their three World Cup matches in Group H, the shortest journey by some way at this summer’s tournament.

A lack of playing time against the likes of Marouane Fellaini, Nacer Chadli and Thomas Vermaelen may not be ideal, but the Red Devils have looked impressive during recent warm-up matches and should qualify from a relatively easy group in June.

Russia will be looking to make the last 16 of the World Cup, after an impressive qualifying campaign under Fabio Capello.

Just five goals were conceded by Russia in their 10 World Cup qualifiers, but a lack of adventure will need to be addressed with Alexander Kerzakhov leading the line and playmaker Alan Dzagoev desperate to recapture his form at Euro 2012.

The likes of Germany or Portugal are likely to be Russia’s opponents in the knockout rounds, but the European qualifiers have never had a better chance of making it to the knockout stages, after failing to do so in 1994 and 2002.

Myung-Bo Hong, South Korea’s most capped player has taken over after guiding his country to a bronze medal at the 2012 Olympic games, but the Taeguk Warriors have plenty to prove going into this summer’s tournament in Brazil.

A collective spirit that saw the nation reach the quarter finals of the World Cup on home soil in 2002 will need to be rekindled, but after failing to make the knockout stages in six of the last eight editions, a place in the last 16 seems too far for Myung-Bo Hong’s side.

An away goals victory in the play-offs against Burkina Faso saw Algeria book their place at the 2014 World Cup, but the African side do possess some emerging talent to upset the mix in Group H.

Tottenham’s Nadil Bentaleb and Inter pair Saphir Taider and Ishak Belfodil will all feature for the Desert Foxes, who have yet to progress past the group stages of a World Cup.

Vahid Halilhodzic’s side may be the outsiders of Group H, but the African side are by no means the whipping boys of the group.