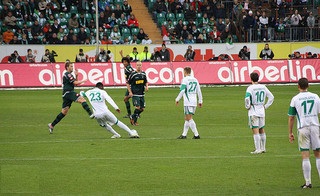 Published on May 5th, 2013 | by Sportingly Better Tipster

Our weekend football tips come from the Bundesliga, as Hamburg host Wolfsburg.

Wolfsburg’s 3-1 win over Borussia Monchengladbach at the Volskwagen Arena last weekend, secured die Wolfe’s top flight status in the Bundesliga, but the lower Saxony club could keep their outside chance of European football alive, with a win on Sunday.

Wolfsburg are unbeaten in their last seven games in the Bundesliga and Dieter Hecking has finally delivered a run of consistency that die Wolfe have been threatening to deliver all season.

Only Bayern Munich and Borussia Dortmund can boast a better away record than Wolfsburg in the Bundesliga, who have won three of their last five games away from home.

Hosts Hamburg have lost four of their last six games in the league and the Rothosen‘s Champions League hopes have all but ended after a 4-1 defeat against Schalke last time out.

Hamburg have not kept a clean sheet in any of their last six games in the Bundesliga and the suspension of first choice goalkeeper Rene Adler will have only increased Thorsten Fink’s challenge of getting his side to record a shut-out.

Visitors Wolfsburg are undefeated in their last six matches at the Imtech Arena and die Wolfe should continue their unbeaten run against Hamburg on Sunday.