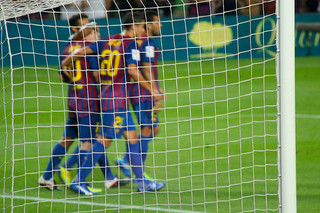 This weekend we return to Europe with Bayern Munich hoping to extend their 100% record to nine games following a 5-0 victory away at Dusseldorf. Defending champions Borussia Dortmund now find themselves 12 points behind the Bavarians after their defeat against Schalke, whilst Eintracht Frankfurt continued their good start to the season with a 3-1 victory over Hannover at the Commerz-bank Arena.

Italian champions Juventus secured a crucial victory over nearest rivals Napoli thanks to late goals by Martin Caceres and Paul Pogba. Inter Milan continued their resurgence following a a 2-0 victory over Catania to extend their run to four straight wins in Serie A, whilst Lazio consigned AC Milan to further misery with a 3-2 victory at the Stadio Olimpico. The Rossoneri now languish in 15th place, just one point away from Palermo in 19th.

In France, PSG jumped ahead of Marseille who slipped to a surprise defeat away at Troyes. PSG claimed their fifth win of the season after a 1-0 win against Reims, whilst Nancy’s win-less run extended to eight games after a 1-1 draw with Sochaux.

It’s as you were in Spain with Atletico Madrid level on points with Barcelona at the top of La Liga. Malaga continued their good start to the season under Manuel Pellegrini thanks to a 2-1 victory against Real Valladolid, Real Madrid picked up a routine win against Celta Vigo and Deportivo slipped further into the mire after defeat to Barcelona.

After a nine goal thriller at the Riazor, La Liga leaders Barcelona find themselves back on the road again.

The Catalan giants make the trip inland to Madrid to take on 12th placed Rayo Vallecano, who have lost four of their last five games in the league. Only Deportivo boast a worst defensive record than Rayo, but Paco Jemez’s defensive record at the Campo de Futbol de Vallecas is more encouraging with only three goals conceded in four games, despite the visits of Sevilla and Real Madrid last month.

Leo Baptistao is one to watch and the young Brazilian scored twice last time out against Espanyol to take his tally up to four goals for the season.

Visitors Barcelona continue to struggle defensively and look set to again be without first choice centre back pairing Carles Puyol and Gerard Pique.  Make-shift centre half Javier Mascherano is suspended following his red card last weekend, so Alex Song may again be asked to fill in defence, whilst young centre back Marc Bartra featured midweek in the Champions League against Celtic.

Coach Tito Villanova appears unconcerned about Barcelona’s defensive frailties telling a press conference; “I think we are the team who has scored the most goals and one thing sometimes compensates for the other”, but Barca are yet to keep a clean sheet away from home this season.

Somewhat unsurprisingly Barcelona find themselves as the league’s top goal scorers and Villanova’s side have scored two or more goals in 24 of their last 26 games in La Liga.

Barcelona have a good record in this fixture and were 7-0 victors here last season and the flood of goals should continue this weekend against Rayo Vallecano.