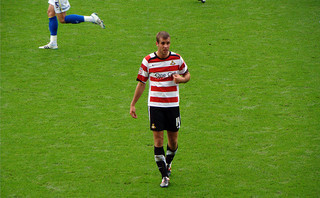 Our football tips for the weekend come from the English Football League as League One leaders Doncaster travel to Scunthorpe.

Last weekend’s 1-1 draw with bottom side Portsmouth left Doncaster only two points clear of Brentford at the top of the table and Donny will need to ensure they are not complacent against another relegation threatened side on Saturday.

Doncaster have lost just one of their last eight games in League One, but the failure to sustain a winning run over that time has fortunately not proved too costly.

Donny boast League One’s best away record and the south Yorkshire club will need to continue that form should Flynn’s side mount a challenge for the title.

Midfielders Dean Furman and Cameron Howieson are both away on international duty, whilst John Lundstram and David Syers are doubtful in the Doncaster midfield.

Hosts Scunthorpe have lost five of their last six games in League One and Brian Laws’ side are in danger of following Bury Hartlepool and Portsmouth as likely relegated teams going into the fourth tier.

Defenders Paul Reid and Eddie Nolan should both make the starting line-up this weekend, but midfielder Damien Mozika has been ruled out for the rest of the season.

The Iron have scored in nine of their last 10 league matches at Glanford Park and the home side will have to find the net at least once if they are to get any kind of result against the league leaders.

Only Carlisle and bottom side Portsmouth have a worse defensive record than Scunthorpe and with both sides pressing for three points, goals should once again be likely on Saturday.

Last weekend’s draw against Dagenham and Redbridge saw Burton slip to third in the league, but the Brewers still remain hopeful of clinching automatic promotion this season.

Burton have lost just one of their last 11 games in League Two and Gary Rowett’s side will be confident of another win on Saturday.

The Brewers boast the joint-second best attack in the division, with front trio Calvin Zola, Billy Kee and Jacques Maghoma responsible for 40 of Burton’s 61 goals in the league.

Burton enjoy the best record at home in League Two with 14 wins out of a possible 19 and the Staffordshire based club will be keen to extend that dominance on Saturday.

Opponents Wycombe have won just two of their last eight games in League Two and player/manager Gareth Ainsworth appears to have lost his way after a promising start in November that had the Blues sitting just seven points off the play-off places.

Wycombe have lost 10 games away from home this season and promotion-chasing Burton will be eager to stake their claims for an automatic promotion spot on Saturday.