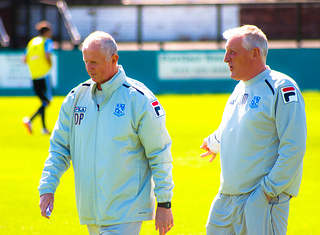 This week we return to the English Football League with Cardiff top of the Championship.

The Bluebirds maintained their 100% home record last weekend thanks to a late goal from Craig Conway. Leicester, Watford and Hull all picked up vital wins to maintain their positions in the play-offs, whilst Ipswich secured a late win over Bolton to move the Tractor Boys out of the relegation zone.

In League One, Tranmere remained top despite failing to win for the third successive match. Doncaster, MK Dons and Brentford all picked up wins to maintain the push near the the top, but Leyton Orient remain the team to watch after a fourth successive win. In-form Coventry City were denied all three points at the Ricoh Arena following Izale McLeod’s late goal for Portsmouth.

Port Vale closed the gap on leaders Gillingham in League Two, whilst Southend’s surge up the table continued. Elsewhere there were wins for Rotherham, Cheltenham and Torquay, as Chesterfield’s win away at Plymouth edged the Pilgrims closer to the drop zone.

We’ve got bets at table-topping Tranmere this weekend, as well as Middlesbrough’s trip to Peterborough in the Championship.

Tranmere’s dip in form continued last weekend, with the league leaders only managing a point against Stevenage.

Ronnie Moore has had a number of injuries to contend with recently and captain James Wallace has been the latest member of the squad to be sidelined through injury. French forward Jean-Louis Akpa Akpro is still missing, whilst on-loan defender Ben Gibson looks unlikely to feature due to a muscle strain.

Rovers have a formidable record at Prenton Park and Tranmere are undefeated in 20 of their last 22 home matches in League One.

Guy Whittingham faces an unenviable task at Fratton Park, but the caretaker manager has snapped up goalkeeper Phil Smith to provide competition for Simon Eastwood. Lee Williamson and Mustapha Dumbuya should both return for Portsmouth who have lost three of their last four games on the road.

With Doncaster and MK Dons applying the pressure, Tranmere will be keen to return to winning ways against Portsmouth on Saturday.

Middlesbrough’s surge up the Championship table continued to stutter following a late 3-2 defeat at St Andrews.

Boro have lost three of their last four games in the league, but Middlesbrough’s performances have still held some merit. Injuries have took their toll but George Friend, Faris Haroun and Jonathan Woodgate could all return on Saturday.

Middelsbrough had to contend with four games in 13 days towards the end of November, so the eight day break this week will be welcome relief for Tony Mowbray’s side.

Boro are capable from scoring all over the pitch and the Teeside club have featured 18 different scorers in the league this season. Middlesbrough’s away form has been impressive with eight wins on the road in all competitions, so the trip to London Road is not one Tony Mowbray’s side will fear.

Hosts Peterborough sit bottom of the table after a 4-1 defeat at home to Blackpool and Darren Ferguson’s side have an uphill struggle to survive the drop this season.

Only Ipswich and Barnsley have scored fewer goals than Posh  in the Championship and Peterborough remain heavily short of striking options at present.

Peterborough have lost eight of their last 10 home matches in the Championship and Ferguson’s side look set to be in for a long afternoon this weekend.