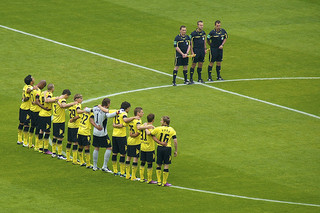 This weekend we return to European football after Juventus finally lost their unbeaten record to Inter Milan at the Juventus Stadium.

AC Milan and Fiorentina both picked up emphatic wins, with the two sides facing each other at the San Siro this weekend. Genoa suffered their fourth straight defeat in the league against bottom side Siena and Lazio lost 4-0 to Catania, with the Biancocelesti facing rivals Roma at the Stadio Olimpico on Sunday.

Leaders Bayern Munich got back to winning ways with a 3-0 victory at Hamburg, second placed Schalke slipped to a surprise defeat against Hoffenheim, whilst Leverkusen extended their unbeaten run to seven games in the Bundesliga. Elsewhere Stuttgart’s resurgence continued with a goalless draw at the Westfalenstadion, whilst Augsburg and Greuther Furth moved further into the mire.

It’s as you were in Spain with wins for Barcelona and Real Madrid. Second placed Atletico Madrid suffered defeat against Valencia, whilst in-form side Real Betis fell apart at home to Granada on Friday.

Champions Borussia Dortmund remain 11 points adrift of leaders Bayern Munich who returned to winning ways last weekend with a 3-0 victory away in Hamburg.

Die Schwarzgelben’s league campaign has been hampered by their European adventure, but the 2-2 draw at the Bernabeu highlighted the heights that Jurgen Klopp’s swash-buckling side are capable of.

BVB’s record on the road in the Bundesliga  has been less than encouraging with just one win in five games, but Dortmund’s performances away from the Westfalenstadion have been steadily improving and Klopp’s side have scored in every away game this season.

The Polish contingent of Jakub Blaszczykowski, Lucas Piszczek and Robert Lewandowski have been performing well, summer signing Marco Reus has impressed going forward, but it’s midfielder Ilkay Gundogan who has really shined for BVB in midfield.

Hosts Augsburg remain rooted to the Bundesliga and last weekend’s 2-0 loss to Hannover was the seventh time in 10 games that Markus Weinzierl’s side have failed to score.

Defenders Paul Verhaegh and Sebastian Langkamp have arguably been FCA’s best players this season, but it is the lack of goals that look destined to seal Augsburg’s fate.

Augsburg have lost three of their five games at the SGL Arena and the attacking qualities of Borussia Dortmund should see Klopp’s side pick up a vital three points and push BVB closer to a Champions League qualification place.