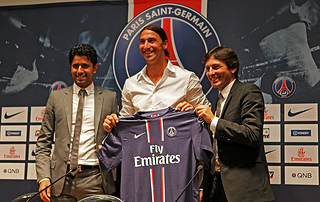 Marseille kept their 100% record alive in Ligue 1 after narrowly beating Evian last weekend. Lyon and Lorient could only manage draws, but PSG were 4-0 victors away at Bastia courtesy of yet more Zlatan Ibrahimovic goals.

Over in Germany, Bayern Munich eased to their fifth successive win with a 3-0 midweek victory over Wolfsburg; Mario Mandzukic with two of their goals. Hannover and Schalke both secured victories, but Borussia Dortmund could only manage a point at in-form Frankfurt.

Juventus kept their unbeaten record intact despite a less than impressive goalless draw with Fiorentina. An Edison Cavani hat-trick gave Napoli a 3-0  win against Lazio, whilst there were wins for both AC Milan and Inter Milan during the week.

Barcelona’s makeshift defence held firm as the Catalans picked up a clean sheet in a 2-0 victory over Granada and Real Madrid made it two wins out of two with victory over Rayo Vallecano.

PSG have began asserting their authority in Ligue 1 after a slow start to the season and the pre-season favourites are beginning to play like champions-elect.

Swedish import Zlatan Ibrahimovic has scored seven of PSG’s 10 goals in the league, picking up a brace in the 4-0 victory away at Bastia last weekend.

The capital side have scored six goals without reply in their last two matches and manager Carlo Ancelotti will be pleased with the defensive unit he has available this season following the captures of Thiago Silva and Gregory van der Wiel. PSG have conceded just one goal in the last five games and enjoy the second best defensive record in Ligue 1, behind leaders Marseille.

Visitors Sochaux have won their last two games on the bounce following wins over St Etienne and Troyes. Les Lionceaux find themselves predictably in mid-table but just one goal scored away from the Stade Auguste Bonal highlights the issues Eric Hely’s side have away from home.

With PSG freely scoring and Ancelotti’s back line holding firm, a winning margin of more than one goal looks likely for the capital side.