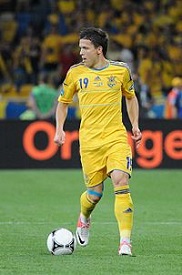 England’s 4-0 victory over Moldova on Friday left the Three Lions firmly in control of Group H and if you followed our advice and free football tips here on Sportingly Better, then you would have come away with a healthy profit as we banked both of our selections.

Sportingly Better picks out the best value football predictions on Tuesday including two 14/1 football tips, as England take on the Ukraine.

England will be looking to avoid defeat in Kiev on Tuesday, with Group H delicately poised.

Just one point separates group rivals England, Montenegro and the Ukraine, with second-placed Montenegro having played one game more.

England will have to contend with the attacking absentees of Wayne Rooney, Danny Welbeck and Daniel Sturridge, so Southampton striker Rickie Lambert may lead the line; with Jermain Defoe readied to make an impact from the bench.

The Three Lions have failed to beat both Poland and Montenegro away from home in Group H, so Roy Hodgson’s tactics may be to pack the midfield and use the pace of Theo Walcott and Ashley Young on the break.

Midfielders Andriy Yarmolenko and Yevhen Konoplyanka will have to be closely monitored by England, so the workmanship of James Milner may see the Manchester City midfielder drafted in to the starting eleven in place of the suspended Danny Welbeck.

A late Frank Lampard penalty in the reverse fixture last year secured England a somewhat fortuitous point in the opening game of Group H and with both sides likely to be set up to contain the other, expect the spoils to be shared in Kiev on Tuesday.