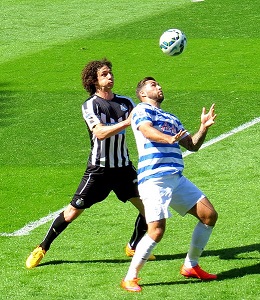 Top Half Betting – Why Newcastle are a Good Outside Bet

Newcastle’s switch in transfer policy looks set to highlight the ambitious plan outlined by the club and head coach Steve McClaren for the forthcoming season and with one of the clubs five reported targets secured, backing the Magpies in the antepost markets should provide the best value given potential movements by the club this time around.

Newcastle’s first foray into the transfer market could prove to be telling.

The capture of attacking midfielder Georginio Wijnaldum for a reported £14.5 million has shown the club an indication of the level of expenditure that is expected to be forthcoming this term

The fee for the former PSV captain is the biggest single amount paid for a player by owner Mike Ashley during his eight-year reign as owner and the “plan” by newly installed manager Steve McClaren suggests that there may be as many as a further three or four signings at that level.

McClaren has spoke about Wijnaldum being the right fit and age for Newcastle, with the club appearing to finally be set on attracting a high level calibre of player after spending the last few seasons with a limited budget.

The Need for a Top Striker

Strikers such as Bas Dost from Wolfsburg have been mooted, after winning the German cup and helping his side to second place in the Bundesliga, but the arrival of promising youngster Aleksandar Mitrovic is rumoured to be close according to his agent Pini Zahavi.

The 20-year old Anderlecht striker fired in 20 goals last season in the Belgian Pro League to take his tally to 36 goals in 69 games for the club and a fee similar to that of Wijnaldum has been mooted to secure the services of Anderlecht’s record signing.

Movements for QPR forward Charlie Austin have also been outlined and the addition of the English striker would add a level of assurance in terms of return in front of goal after firing in 18 goals from 35 Premiership matches last season.

Whether Senegalese forward Papiss Cissé stays at the club remains to be seen, but the introduction of one or two prolific strikers look more than enough to catapult Newcastle into serious top half contenders looking at the odds currently available in the football betting markets.

Newcastle’s ambitious plan and transfer policy this season looks set to reignite the clubs fortunes and give former England manager Steve McClaren plenty of opportunities to propel the side further up the table.

The development of both Rolando Aarons and Ayoze Perez under McClaren will be interesting, especially given the clubs ambition to sign one or two prolific strikers, but the departure of Papiss Cissé could be seen as giving the green light to push on both players.

Newcastle’s core base and foundations are set to finally be injected by quality attacking talent and the odds of the club finishing in the top 10 contain plenty of value given the clubs growing potential arrivals this season.

Recommended Football Betting Tips Back Newcastle to finish in the top half of the Premier League @4.50