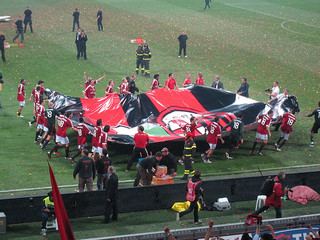 Last season Juventus secured the Scudetto in emphatic style in what turned out to be an unbeaten season under manager Antonio Conte. Sportingly Better analyses the Bianconeri’s chances this time round and the challenge from Inter and AC Milan and the rest of the Serie A sides.

Champions Juventus finished four points ahead of AC Milan, whilst third placed Udinese were a further 16 points back, highlighting the gap between the top two and the rest of the league last season.

The Rossoneri have overseen a cost-cutting summer under Silvio Berlusconi with Thiago Silva and Serie A top scorer Zlatan Ibrahimovic who scored 28 goals last term both being sold to PSG. Massimiliano Allegri will not only have to deal with a dip in quality but also a lack of squad depth with Gattuso, Van Bommel, Seedorf and Nesta all being asked to move on.

Christian Zapata has been brought in from relegated Villarreal to compensate for the loss of Thiago Silva and the Colombian international will have to form a quick partnership with Philippe Mexes if Milan are going to match their 33 goals conceded in Serie A last season. Ricardo Montolivo is beginning to show his quality for the Azzuri and shone for Fiorentina last season although further reinforcements Kevin Constant and Sulley Muntari will do little to excite the Rossoneri fans.

The inexperienced Andrea Stramaccioni is at the helm of neighbours Inter, but Stramaccioni too has seen a number of seasoned players leave the San Siro this summer including the likes of Lucio, Diego Forlan and Goran Pandev.  Forward Rodrigo Palacio has come in who scored an impressive 19 goals for Genoa last season and if the Argentinian international can recreate that return for the Nerazzuri then Inter could at least hint at becoming credible challengers.

Gaby Mudingayi will add steel and extra defensive cover to Internazionale’s midfield, whilst Samir Handanovic looks set to be Stramaccioni’s new number one at the club with Julio Cesar’s position uncertain.

Roma have done well in the transfer market replacing the likes of Heinze and Borini with Balzaretti and Mattia Destro as the capital side turn to securing up and coming continental talent. Rivals Lazio have virtually been dormant in the transfer window.

Napoli lost Ezequiel Lavezzi to PSG who hit nine goals last term in Naples, choosing to replace the Argentinian with Goran Pandev and current Chilean player Eduardo Vargas. Valon Behrami and Alessandro Gamberini have been added to the squad and Napoli should push again for a Champions League place again this season.

The most improved side in Serie A this season could be Fiorentina despite the possible departure of Steven Jovetic. The Viola who now have Vicenzo Montella at the helm have brought in midfielders David Pizzaro and Alberto Aquilani, defender Mattia Cassani, goalkeeper Emiliano Viviano and Moroccan striker Mounir El Hamdaoui to heavily improve the squad in Florence.

Champions Juventus have cleverly brought back Sebastian Giovinco to the club who scored 15 goals for Parma last season in what was an impressive campaign. Mauricio Isla and Kwadwo Asamoah have been added to the midfield after the departures of  wingers Milos Krasic and Ejero Elia who did not feature in Conte’s plans. Lucio and Paul Pogba have also joined, whilst Martin Caceres and Emanuele Giaccherini have completed permanent moves to Turin to add to Conte’s title-winning squad.

The 10 month ban imposed on the Juventus manager for failing to report match-fixing is a blow with Conte banned from the dug-outs on match days, but the former player is free to train and prepare his squad as normal. The appeal from Conte may see that ban reduced, which would only strengthen the Bianconeri’s chance to retain the Scudetto this season.

Serie A gets underway this weekend with Juventus hosting Parma.