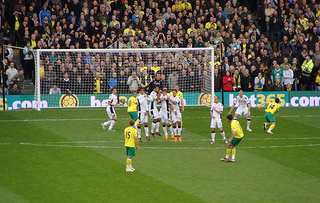 The Premier League gets underway this weekend with champions Manchester City opening their title defence against newly promoted Southampton. Runners-up Manchester United will have to wait until Monday to see new signing Robin Van Persie, as the Red Devils travel to Goodison Park.

Fulham have arguably been one of the most impressive sides in their warm-up games over the summer and if pre-season form is anything to go by the odds of 1.80 on a home win look good value.

The Cottager’s new signing Mladen Petric has been scoring for fun in pre-season and will once again link up with manager Martin Jol after their time at Hamburg together. Fulham have boosted their attacking ranks further with the signing of Hugo Rodallega and coupled with Moussa Dembele and Bryan Ruiz, Fulham are assembling an impressive squad.

Opponents Norwich come into the new season with a new manager, with Chris Hughton replacing Paul Lambert in the Canaries hot-seat. Hughton has clearly focused on improving the defence after Norwich shipped 66 goals last term. In have come Michael Turner and Steven Whittaker, whilst left-back Javier Garrido has recently joined on loan from Lazio. A lot will again hinge on Grant Holt, who will need to reproduce the 15 goals he scored last season to give Norwich a chance of survival.

Last season Norwich came away with victory at Craven Cottage, but Fulham’s strength at home and pre-season form should see Martin Jol’s side come away with the three points on Saturday.

QPR have enjoyed a productive summer and Mark Hughes has heavily strengthened his side for the coming season with a raft of new arrivals.

Manchester United’s Park Ji-Sung has arrived along with the free transfer signings of Ryan Nelsen, Andy Johnson and Junior Hoilett. Fabio has joined on loan, whilst free agent Jose Bosingwa should arrive later today, who has twice won the Champions League with Porto and Chelsea.

QPR’s form at home late on in the season was key to their Premier League survival, with Mark Hughes’ side winning their last five games at Loftus Road including victories over Arsenal, Liverpool and Tottenham.

Opponents Swansea meanwhile have lost notable personnel this season. Steven Caluker’s and Gylfi Sigurdsson’s loans have expired, whilst Wales international Joe Allen has followed Brendan Rogers to Liverpool. Like Southampton, Swansea have experienced a rapid rise to the Premier League and new manager Michael Laudrup will have his work cut out to keep the Swans in the top flight this season.

QPR look set to maintain their end of season form at home and should have too much for Swansea this weekend.