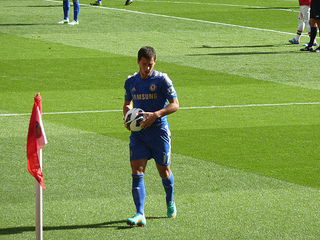 Leaders Chelsea came away with a 2-1 victory at the Emirates Stadium, Manchester City won away at Craven Cottage,  but Manchester United suffered a surprise defeat at the hands of Tottenham who have now won three games on the bounce.

Liverpool, Sunderland and Stoke all picked up their first wins of the season, whilst Everton moved up to second place with a 3-1 win over Southampton.

Elsewhere alarm bells are beginning to ring for Mark Hughes whose QPR slipped to another defeat on Monday, who along with Norwich and Reading are beginning to be cut adrift at the bottom of the Premier League table.

Premier League leaders Chelsea have the meanest defence in England and the strike by Gervinho last weekend was only the third goal the Blues have conceded this season.

Chelsea picked up another clean sheet during the week with a comfortable 4-0 win over Nordsjaelland and the Champions League winners look set to welcome back captain John Terry despite an impending ban. Eden Hazard, who was also rested for the trip to Copenhagen, should return alongside Juan Mata who has been impressive in recent weeks.

The Blues have a 100% record at Stamford Bridge this season and the visit of Norwich should not unduly worry manager Roberto Di Matteo who has seen his side win five of their opening six games in the Premier League.

Opponents Norwich conceded five goals for the second time this season and manager Chris Hughton will need to steady the ship as Norwich go in search of their first win of the season. The Canaries late consolation goals against Liverpool doubled their tally to four goals for the season, but the form away from Carrow Road is again concerning.

The odds in the betting market are too short for the home win, but Chelsea have won their last two games at the Bridge without conceding and the same happening on Saturday look to hold some value.