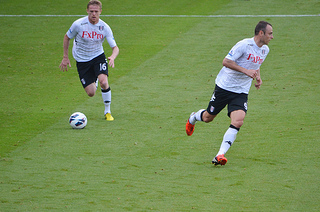 Stoke’s 2-1 victory in the Potteries increased the pressure on Newcastle United manager Alan Pardew, with the Magpies now having lost their last four games in the Premiership.

Liverpool’s eight match unbeaten run came to an end with a 2-1 defeat at White Hart Lane, whilst in-form West Brom slipped to defeat in Wales.

Elsewhere there were routine wins for both Manchester clubs as the Red Devils maintained their one point advantage at the top of the table.

Our Premier League predictions this weekend come from London as Fulham welcome Tottenham to Craven Cottage.

Last weekend’s 2-1 victory over Liverpool lifted Tottenham to fifth in the league, just two points behind Chelsea in third place.

Goals have typified Tottenham’s season so far and Andre Villas-Boas’ side have only once failed to find the net in the league.

Scott Parker, Younes Kaboul and Benoit Assou-Ekotto remain on the sidelines, whilst Emmanuel Adebyaor is still suspended, but in Jermain Defoe, Gareth Bale and Clint Dempsey, Tottenham have three players who all hit double figures in the Premier League last season.

After a run of three successive defeats, Spurs have gone on to win their last two games and Tottenham remain in realistic contention for a Champions League qualification spot this season

Hosts Fulham were largely impressive last time out in a goalless draw at Stamford Bridge, but the Cottagers have now gone six games without a victory.

Martin Jol’s side continue to be free-scoring and in Dimitar Berbatov, Jol possesses a striker of real class. The Bulgarian striker has scored 23 goals in his last 27 Premier League starts and Tottenham will have to closely monitor their former player.

The injury to Bryan Ruiz is a blow for the Cottagers who have scored in every league game at Craven Cottage this season, but Mladen Petric has scored all four of his goals in the league at home.

Only the two Manchester clubs have scored more goals than Fulham and Tottenham this season and the goals should be flowing at Craven Cottage on Saturday.