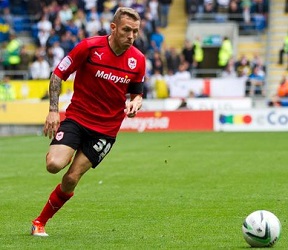 With just a few days to go until the start of the Premiership season, Premier League betting expert Barrie takes a look at the best bets in the ante-post relegation market, with two tips on who will go down.

The Premier League relegation battle is always an exciting one and always very difficult to predict at the start of any season.

Many will be expecting at least one of the three promoted teams to go back down where they came from, but Crystal Palace, Hull and Cardiff are all determined to avoid the drop.

A number of teams who were involved in the relegation battle have been strengthening their squads over the summer, with  Sunderland, Aston Villa and Fulham having all brought in a number of players. Southampton have spent heavily on a couple of new faces, whilst Norwich City have also added a number of players to their squad.

Ian Holloway’s side are the early favourites to go back down, after beating Watford 2-0 in last season’s Championship playoff final. Crystal Palace were unfancied by many to gain promotion last term and perhaps because of that reason, they are widely tipped to go down.

The Eagles have lost Wilfried Zaha to Manchester United, who was arguably their most important player during their promotion campaign last year and the fact that Ian Holloway’s side does not contain a great deal of Premier League experience also counts against them.

Kevin Phillips has proved his worth over the years but age is not on his side anymore and the veteran striker will need some creative players around him to provide plenty of the running.  Exciting Spanish under-20 international José Campaña and Jerome Thomas will be the ones Holloway looks to.

No team conceded more goals than Crystal Palace in the top 10 of the Championship last season and the fact that the Eagles have not strengthened their defence so far this summer, could be a big mistake.

Hull’s owners have not done themselves any favours with a name change shortly before the start of the season, with the club now known as the Hull City Tigers.

Steve Bruce guided the Tigers over the finishing line into second position when no team seemingly wanted to take control of the situation and be promoted to the Premier League.

Curtis Davies, Maynor Figueroa and Steve Harper all have Premier League experience and although goalkeeper Allan McGregor was highly-rated in Scotland, I’ve yet to be impressed whenever I have seen him.

Steve Bruce’s side will look to grind out results and keep it tight at the back this year. A hardworking team they may be, but they’ll need something more than that to stay up this season.

The unpopular decision to change Cardiff’s shirts from blue to red last season proved to be a success as the Bluebirds lifted the Championship title to become the 46th team to participate in the English Premier League.

A solid defence in the Championship proved crucial and Malkay Mackay will be hoping his side can be similarly strong at the back in England’s top flight.

Mackay has been quite measured and targeted in the transfer market so far, but former Tottenham defender Steven Caulker remains the only acquisition with Premier League experience.  Andreas Cornelius scored regularly for FC Copenhagen last term, but as a big money signing, Cornelius has little experience behind him.

Cardiff fanatic Craig Bellamy will get a lot of the attention heading into the campaign, but Fraizer Campbell’s one to keep an eye on after an impressive goal ratio towards the end of last season.

With a tight defence and a decent attack, Cardiff City on paper are the strongest of the three promoted sides.

Norwich City have the shortest odds amongst teams who competed in the Premier League last year, despite 12th and 11th place finishes over the past two seasons.

Chris Hughton’s side finished eight points above the drop zone; but a 10-game unbeaten streak did much to steady the Canaries.  Are the Canaries going to beat both Arsenal and Manchester United at home again this season?  Will they score 4 in Swansea and win at the Etihad?  I can see why many fancy Norwich to go down.

Grant Holt has been the focal point of Norwich’s attack over the past few years, but a shift in policy and formation has seen Gary Hooper and Ricky van Wolfswinkel come into the squad.

Both players have proven goalscoring ability outside the Premier League, but keeping hold of John Ruddy after interest from Chelsea may prove to be one of the best moves by the club this summer.

There have certainly been some exciting signings by Norwich this summer but it is important Chris Hughton can gel them into the squad quickly and get the best out of them.  On paper though, this Norwich team is good enough to again avoid relegation.

A terrible 2013 saw Tony Pulis lose his job at the end of last season despite maintaining Stoke City’s status as a Premier League club. Mark Hughes was appointed at the Britannia Stadium despite setting Queens Park Rangers up for relegation, but what he has done previously with Blackburn Rovers and Fulham will leave fans wandering which Hughes will turn up.

I won’t buy into the statements coming out of Stoke that they will try to play football this season.  That’s not what they’ve done to become a mid-table team previously and that’s not how Mark Hughes plays his football either.  I’ll wait until I see it before I believe it, but it has a high risk to backfire with a large number of players better suited to their current style.

Not much has happened in the transfer market, with only a couple of defenders that have been added to the squad.  Stoke, were great during the first half of last season, leading the league in clean sheets, but they fell apart after Christmas.

Hughes needs to get Stoke back defending well if they want to avoid being in a relegation scrap this season.

The one team I’ve struggled with predicting this season is Sunderland.  An unpredictable manager who I have a gut feeling is going to lose fall out with a number of players if they make a bad start or go on a bad spell at any point.

Paolo Di Canio took a lot of credit when he won two out of of his three opening games as Sunderland manager, but they didn’t win any of their last four matches after that.

There’s a number of players on the list that many will not know, but you’ve also got to factor in Simon Mignolet’s switch to Liverpool, which I think is a big loss.

In Steven Fletcher they have a goalscoring striker, but Jozy Altidore failed to impress in the Premier League last time around. I like Emanuele Giaccherini as an attacking option down the left wing for the Black Cats; a player who makes good runs and finds space, but there’s a lot of uncertainty and unpredictability in terms of management and arrivals to make Sunderland a bit of a no-bet.

Prior to the takeover of billionaire Shahid Khan, I had Fulham down as serious contenders for relegation and unless they invest some more I can see them battling it out to survive.

Martin Jol’s side were plummeting towards the end of the table last season and an over-reliance of goals from Dimitar Berbatov needs to be addressed.  That’s not a bad thing to rely on because the Bulgarian does deliver, but the Cottagers could do with another goalscoring option for when he has quiet games or should he be injured.

Fulham have a couple of exciting young midfielders whom Jol has so far only blooded, but Maarten Stekelenburg looks a useful addition to the squad.

I can see Martin Jol coming under pressure if Fulham make a slow start.  They have some exciting players but the Cottagers need to improve their defence and either get 20 goals from Dimitar Berbatov or find someone else in the team who can support him, if they want to avoid a relegation battle.

I’m surprised to see Southampton at shorter odds than both Aston Villa and West Brom.  They’ve spent a lot of money over the past two summers and are building a solid team under Mauricio Pochettino.

Dejan Lovren and Victor Wanyama have been added to strengthen a defence that finally settled on a goalkeeper last season, after three different shot-stoppers made at least nine Premier League appearances last term.

Southampton do tend to rely on Rickie Lambert for goals, but the Saints appear happy to stick with their England-capped striker, as they have not invested in another so far this summer.  Jay Rodriguez had a good spell towards the end of last season and the Saints will be hoping he can make a bigger impact this season.

Mauricio Pochettino demands high energy and quick closing style of play, which troubled a number of opponents last season.  I expect Southampton to stay away from the relegation zone.

Verdict
As always it’s difficult to predict who the bottom three will be.  I certainly expect Crystal Palace to be down there.  Steve Bruce has a good record of keeping defences tight and picking up points here and there, but I do expect Hull to struggle.  As for the third team, that’s up for grabs.

Norwich look the most likely team to oppose in the relegation betting market, despite being placed as fourth favourites. Chris Hughton has invested wisely across the board and goals shouldn’t be a problem if Gary Hooper and Ricky van Wolfswinkel settle quickly.

The same however cannot be said for Crystal Palace, who have last year’s top scorer Glenn Murray out injured and England international Wilfried Zaha returning to his parent club. Ian Holloway’s signings have been unimpressive and the Eagles look the side shortest on quality this season.

Hull have made good acquisitions to the backline and midfield, but goals too could be a problem for Steve Bruce’s side. Getting Danny Graham or Yannick Sagbo firing will be key, but the Tigers best chance of success could again be by picking up points at home.

Elsewhere, Paolo Di Canio’s Sunderland have the potential to implode, but there will be no shortage of passion on Tyneside.