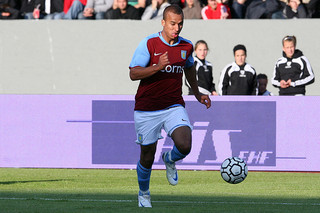 Just six matches take place in the Premier League this weekend, with in-form Tottenham’s visit to Anfield on Sunday the pick of the football action.

Sportingly Better picks out the best Premiership predictions this weekend as Reading host Aston Villa at the Madejski Stadium.

Last weekend’s 3-1 defeat at Goodison Park was the third successive defeat on the bounce for Reading and the Royals appear once again in danger of being sucked deeper into the drop zone.

Brian McDermott’s side boast the second worst defensive record in the league and the Royals are once again battling themselves to effectively outscore their opponents.

Reading’s inability to record a shut-out has seen the Royals last eight games go over 2.5 goals and injuries to Alex McCarthy and Adam Federici could see former Aston Villa goalkeeper Stuart Taylor fill in between the sticks.

Hal Robson-Kanu scored a consolation goal after replacing wide man Jimmy Kebe on Saturday and could keep his place, despite the Mali internationals good form this year.

Visitors Aston Villa have won just one of their last 11 games in the league and Paul Lambert’s side remain in a fierce relegation battle.

The Villain’s defeat against champions Manchester City on Monday night proved not too costly given other results in the division, but victory at the Madejski Stadium would be a massive result for the Midlands club.

Captain Ron Vlaar could return for Aston Villa who boast the third worst defensive record in the Premier League. Fabian Delph begins his suspension, but Darren Bent and Karim El Ahmadi are both ruled out.

The betting odds on both teams to score at 1.61 is a good selection, but with both sides desperate for three points, goals look once again likely at the Madejski Stadium this weekend.