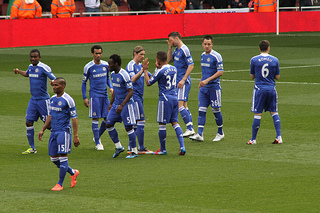 Southampton suffered a 6-1 defeat at the Emirates Stadium and  are yet to get off the mark in the Premier League. Aston Villa picked up their first win of the season thanks to a 2-0 victory over Swansea, whilst Chelsea dropped their first points of the season after a feisty goalless draw against QPR.

Manchester United picked up a comfortable win at home to Wigan, whilst Manchester City could only manage a draw at the Britannia stadium.

Sunday throws up two huge games in the Premier League with Manchester United facing Liverpool at Anfield and Arsenal travelling to the Etihad Stadium to take on Manchester City.

Chelsea dropped their first points of the season last weekend following a goalless draw with QPR, despite two strong shouts for a penalty at Loftus Road.

The Blues faced Italian champions Juventus in the Champions League on Wednesday and surrendered a two goal lead at Stamford Bridge as the Bianconeri staged a comeback to cancel out Oscar’s goals. Oscar should be available despite picking up an ankle knock, but Daniel Sturridge is out with a hamstring injury.

Chelsea have won three of their opening four games and remain top of the Premier League. Eden Hazard has demonstrated his ability and contribution for the Blues early on, but striker Fernando Torres will need to fill the Didier Drogba void this season if Chelsea are going to run the Manchester clubs close.

This is the first real test for Stoke who have the lowest pass success rate (66.7%) out of all of the 98 teams in Europe’s top five leagues. Chelsea have a good record against Stoke in the Premier League and should pick up three points on Saturday to keep their place at the top of the table.