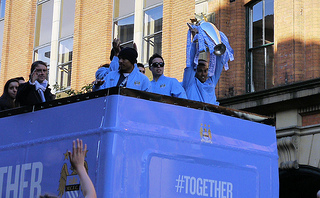 Last season’s title race went right to the wire, with the championship decided on goal difference in dramatic fashion on the final game of the season. The Manchester clubs again head the betting markets in an eagerly anticipated season.

Manchester City (2.25) have experienced an especially quite transfer window, prompting Roberto Mancini to voice his frustration at the club and sporting director Brian Marwood.

The Premier League champions have brought in young Everton midfielder Jack Rodwell, but the biggest boost this season may be in the shape of Argentine forward Carlos Tevez who missed a large part of last season. The experience gained by the title win last year will benefit both the players and the manager and the stability shown at the club leaves Manchester City as favourites to retain their Premiership crown for the 2012/2013 season.

Manchester United (3.25) moved early in the transfer window and quickly secured the signing of Japanese international Shinji Kagawa from Dortmund after two title winning seasons in the Bundesliga. Youngster Nick Powell was also brought in, but Manchester United look set to make further forays into the transfer market, with the Red Devils declaring their interest in striker Robin Van Persie.

The return of Nemanja Vidic will be a massive boost for Sir Alex Ferguson, whilst any contribution from Darren Fletcher this season would be a bonus. Cleverly and Anderson will need to kick on in midfield with Scholes and Giggs well into their twilight years at the club, whilst David De Gea has a year of Premiership football under his belt after a difficult beginning to his career at Old Trafford.

Arsenal have made a catalogue of signings this season to try and quash the lack of ambition that is frequently levelled at the club by supporters with Lukas Podolski and Ligue 1 top goalscorer Oliver Giroud both arriving at the Emirates Stadium. Perhaps the most inspirational of Arsene Wenger’s signings this summer is Spanish midfielder Santi Cazorla and when you factor in the return of Jack Wilshere, Arsenal have clearly strengthened their side with proven and established European names.

Optimism is certainly evident at Stamford Bridge after last season’s Champions League success. The arrival of Eden Hazard and Oscar in particular have excited the fans, with no shortage of attacking midfielders for manager Roberto Di Matteo to choose from.

The inexperience of Di Matteo as a manager at this level is a concern, especially with the Italian undecided on his best formation and starting eleven. The cover of Mikel, Meireles and Essien in defensive midfield may again be crucial to allow for the forward play and counter-attacking of Hazard, Mata, Ramires, Oscar and Torres.

Success for the Blues could largely hinge on the form and return of Fernando Torres. The departure of Didier Drogba is a negative, but if Torres can recapture the form he showed at Liverpool, then Chelsea (5.50) could go on to present a credible challenge for the Manchester clubs.

Despite the launch of ‘tika-tika’ at Anfield, a 37 point gap should be too much for Brendan Rogers to overturn in 12 months at Liverpool (29.00).

Signings Joe Allen and Fabio Borini are known quantities to Rogers, but the evolution at Liverpool will likely take some time as Rogers assembles and trains the right personnel for his style of football. Question marks remain over the defence with Carragher past his best and Agger linked with a move to Manchester City, whilst the future of Andy Carroll at the club is uncertain.

Andre Villas-Boas appears more comfortable at White Hart Lane and should fare better this time around at Tottenham (26.00).

Signings Sigurdsson and Vertonghen coupled with the loan returns of Caulker and Naughton will boost the squad, but the lack of fire power is deeply concerning with only Jermaine Defoe a proven striker at the club. The protracted signing of Emmanuel Adebayor is frustrating and Tottenham will need to secure the signing of at least one world-class striker if they are to challenge for a Champions League place.