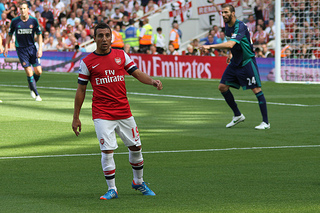 West Ham continued their good start to the season with a 1-0 win over Newcastle at St James Park, whilst West Brom picked up their first win away from the Hawthorns, moving The Baggies up to fifth place.

Champions Manchester City secured a 2-1 win over Tottenham to maintain the pressure on their rivals, but troubled QPR slipped further into the mire with a 1-0 defeat against Stoke.

Arsenal surrendered an early two goal lead last weekend as Fulham fought back to claim a 3-3 draw at the Emirates Stadium.

The return of Jack Wilshere is a timely boost, particularly following recent subdued performances from Spaniards Mikel Arteta and Santi Cazorla, but it is the defence that is causing both Arsene Wenger and Steve Bould headaches, particularly from set plays.

Visitors Tottenham remain above Arsenal in the table, but three defeats in their last four games has unpicked the winning run that Andre Villas-Boas’ enjoyed in September.

Moussa Dembele remains sidelined for Spurs who could name Emmanuel Adebayor in the starting line-up on Saturday. Tottenham are yet to keep a clean sheet away from home and the high defensive line employed against Manchester City looked particularly vulnerable.