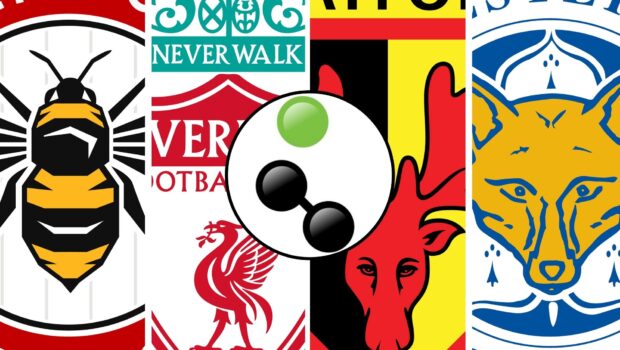 Premier League action enters match week 5 with a familiar picture starting to form at the top of the table, while plenty of intrigue remains in mid-table and at the bottom .

Sportingly Better previews a number of games and brings you betting angles from across the weekend.

Wolves finally saw their efforts rewarded in the last quarter of an hour away at Watford last weekend. After creating a number of chances in the opening weeks, Bruno Lage found his team winless and goalless.

The travelling support must’ve feared a repeat performance, as the visitors continued to squander chances. But faith was restored via an own goal and then again nine minutes later via a debut goal for new signing Hwang Hee-chan. A deserved result for Lage’s men.

Brentford on the other hand tasted defeat in the Premier League for the first time after conceding a late winner away at Brighton.

After picking up five points from their opening three fixtures, the Bees have proved they have what it takes to hang in the top flight. And a narrow defeat to a Brighton team who have impressed in the opening weeks, should not dampen their confidence.

A return home may be the perfect platform for Wolves to kick on now they’ve found a way to convert their chances into goals. But approach with caution, especially against a side who set up well defensively in Brentford.

The Bees have also travelled well so far, picking up two points from two away days making the half goal head start offered on the Asian Handicap an appealing bet here.

Palace were impressive in a dominant win against 10-man Spurs, giving Patrick Vieira his first win as Eagles manager. The win came on the back of a 2-2 draw away at West Ham prior to the international break, another pleasing result for the Frenchman.

Perhaps Palace will be a better team than anticipated this campaign, but a trip to Anfield represents a huge step up against a side the Londoners have lost to in their last eight head-to-heads.

Liverpool’s result away at Elland Road further underlined their return to the heights of two seasons ago. They’re now unbeaten in 14 league games, the longest current streak. More importantly for the Reds, they’ve kept a clean sheet in three of four so far.

Despite the obvious improvement from Palace, it’s hard to see them getting a result here. Even finding the back of the net may prove difficult, and the 19/20 on offer for Liverpool to win to nil is appealing.

Backing the home side to cover the handicap is another approach, with the -2.0 copping in two of the previous three meetings, with a push in the most recent fixture. Odds of 1.775 offered for Liverpool to lay one and three quarter goals will give punters some profit if the home side were to only win by two.

However, we’re expecting another comfortable result for the Reds on Saturday and will happily take the -2.0 at just over evens.

A brave performance from Norwich was not enough as they fell to Arsenal last weekend. The Canaries remain the only winless side through the opening four weeks of the season.

They host a Watford side who have struggled since bursting out of the blocks on the opening day. It’s now three straight defeats for the Hornets, failing to score in all three.

This game may yet prove to be important in the battle for survival and it’s surprising to see the home side priced as favourites.

The visitors have had the better of their opponents in the past two seasons, winning all four meetings across the Championship and Premier League.

While both sides have been far from impressive, Norwich’s performance in their last game may be influencing the bookies a bit much. A quarter goal head start for Watford is appealing, but we’ll happily take the double chance on offer at shorter odds.

The final fixture from our preview is very much a pick ’em as Leicester travel to Brighton on Sunday.

The Foxes have endured mixed results so far with two wins and two defeats, while Brighton have surprised with three wins from four.

Brendan Rodger’s side absorbed a huge amount of pressure from champions City at home last weekend and might consider themselves unlucky not to have converted one of their chances on the break, ultimately running out narrow losers.

On the other hand, the Seagulls were narrow winners against the aforementioned Brentford and will fancy themselves to pick up another result at home.

It’s hard to see Brighton creating the same kind of chances as City here, and with defensive reinforcements on board for Leicester, we fancy them to get something from the game. 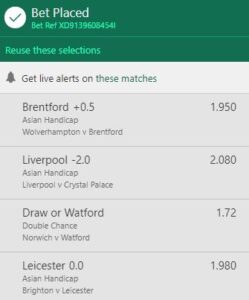