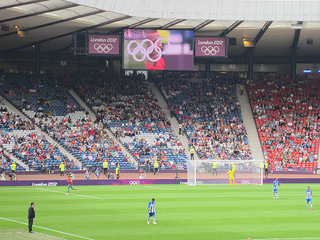 The Men’s Olympic football competition reaches the quarter-final stage after Spain and Uruguay both suffered surprise early exits. Brazil, Mexico and Great Britain will all be hoping to secure their way to the semi-finals this evening and claim an Olympic medal.

Brazil coasted into the quarter finals after winning every game in Group C. Not surprisingly, the firepower of Neymar, Damiao, Hulk, Lucas, Pato and Oscar helped Menezes’ side score three goals in each of their group games. Inter’s Leandro Damiao has impressed alongside Chelsea’s Oscar as Brazil eased into the last eight, with many commentators feeling that Brazil have yet to hit their best form at the 2012 London Olympic Games.

Opponents Honduras finished as runners up in Group D, securing draws against Morocco and Japan, whilst notably beating Spain. Jerry Bengston has scored all three of Honduras’ goals, with the Central American side arguably fortunate to have progressed to the quarter finals, when considering the balance of play in the victory over Spain.

With six of Brazil’s nine goals coming before the break, Brazil should stamp their authority early on at St James Park, in a bet that provides some value for the short-priced favourites.