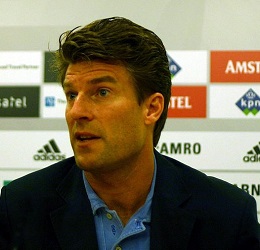 Michael Laudrup’s two-year reign at Swansea City ended yesterday, after a poor run of form that left the club just two points above the drop zone.

Sportingly Better takes a look at some of the best football predictions on who will replace the Danish manager at the Liberty Stadium.

Currently the bookmakers overwhelming favourite for the job, Swansea captain Garry Monk has been put in charge of the Swans for Saturday’s rival clash with Cardiff City this weekend.

Monk has captained the south Wales club in all four divisions in England and the 34-year old defender has vowed to give his all to ensure the Swans ensure their Premier League survival this term.

Swansea Chairman Huw Jenkins is believed to be open to giving Monk a chance at the helm, but defeat against the Bluebirds on Saturday would severely impact the defender’s immediate long term aspirations at the Liberty Stadium.

Monk had a training ground spat with Chico last month after reportedly being angered by several Spanish clichés at the club, so the appointment of Monk could be unpopular with certain elements of the dressing room.

Jenkins has appointed up and coming managers in the shape of Roberto Martinez, Brendan Rodgers and Michael Laudrup in his last three appointments, but Monk’s inexperience on the touchline leaves the odds of 1.57 a little too short in the football betting markets.

Brighton coach Oscar Garcia’s grounding at Barcelona would ensure that the Swans possession-based style of football would continue, something that is thought to be of importance to Jenkins and the Swansea board.

Garcia is new to management after taking his first role with Maccabi Tel Aviv in 2012, but the former La Masia graduate did guide the club to the Israeli championship after a ten-year drought.

Garcia’s nationality could count against the Spanish coach’s chances of being hired this time around, with Jenkins thought to be keen on breaking up the clichés that currently reside within the Swansea City dressing room.

Championship side Brighton are thought to be reluctant to see their new boss leave after a little over eight months at the club and the Seagulls compensation package for Garcia is though to also count against the appointment.

An experienced but somewhat outspoken coach, Marcelo Bielsa has led both Chile and his native Argentina on the international stage.

Bielsa enjoyed his best spell of success at Athletic Bilbao, guiding the club to both the Copa del Rey and Europa League final back in 2012; a run that saw the Spanish side defeat Manchester United in the last round of 16.

The Argentinean coach is immediately available should Swansea wish to appoint him and Bielsa’s emphasis on youth development and a higher attacking intensity, especially away from home is thought to be well favoured by the board and those at the club.

Bielsa is a strong-minded character and at odds of 13.00, the bet does make financial sense, given the Swans paid £4.5m to part with the services of Michael Laudrup.

Whilst Garry Monk is likely to receive plenty of backing from the board and certain sections of the squad, the veteran defender’s lack of experience as a manager and unrefined football philosophy is unlikely to land the captain his shot at managing the club on a permanent basis.

Brighton boss Oscar Garcia has failed to make the instant impact his appointment had intended, but fellow Championship manager Uwe Rosler is thought to be on the Swans shortlist after losing just once in the league since his appointment at Wigan in December last year.

Rosler’s profile carries heavy comparisons with that of former manager Roberto Martinez and at odds of 34.00 the German coach is an interesting bet, despite only recently joining the Latics this term, but Marcelo Bielsa’s credentials and immediate availability makes the Argentinean manager a leading frontrunner for the current vacancy at the Liberty Stadium.