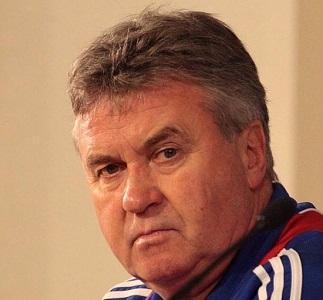 Immediately available after recently leaving the Netherlands after a disappointing campaign, the former Chelsea manager appears to have been sounded out by Leicester’s ambitious owners to become front-runner in the betting odds at 2.75.

The 68-year old has a wealth of experience in club and international football, with a catalogue of achievements ranging from winning the European treble with PSV Eindhoven; taking both the Netherlands and South Korea to fourth-placed finishes in the 1998 and 2002 World Cups respectively as well as leading Russia to the semi-finals of Euro 2008 and Chelsea to an FA Cup victory back in 2009.

An ambitious capture of a global managerial name would surely have to include an ambitious transfer kitty and although the Foxes would like to significantly improve their standing in the Premier League, it is unlikely that Hiddink would accept the vacant managerial position despite taking lesser known jobs for both Australia and South Korea on the international stage.

The early favourite to replace Nigel Pearson is still amongst the names in the running for the Leicester City job and Neil Lennon’s ties with director of football Jon Rudkin and head of football operations Andrew Neville.

Lennon’s time at Filbert Street was thought of fondly by the Foxes and the fans favourite choice would seem like a logical appointment for the East Midlands club.

After a successful spell with Scottish giants Celtic, Lennon has since made the move into English football with Championship side Bolton. The heavily-indebted Trotters have failed to provide a good foundation for Lennon to test his mettle, but his brief cameo in England’s second tier has arguably not harmed his managerial reputation.

The former Leicester player featured 169 times for the Foxes between 1996 and 2000, winning a pair of League Cups during the club’s last  golden era and any failed move for Hiddink could see Lennon as a much more pertinent and viable option for the board.

‘Big Sam’ may well be back in the Premier League this season, but a move to Leicester may be too soon after recently leaving West Ham during the off-season.

Sam Allardyce cited a need to ‘recharge the batteries’ and although his record in the Premier League is steady if not spectacular, the move and assurance for a move for Allardyce could form and grow the basis of Leicester’s obvious ambition on the domestic and subsequent European stage.

An unbelievable run of form saved Leicester from the drop last time round and Allardyce’s sure-footedness in this division has left the former Bolton and Newcastle manager as a strong candidate for the Foxes top job.VerdictDespite an expected approach by Leicester for Guus Hiddink, an actual appointment may not come to fruition given Leicester’s current roster of playing staff and lofty expectations.Any knockback by Hiddink may lessen the appeal to other European candidates on the shortlist and with ties and allegiance to the Foxes, Bolton manager Neil Lennon may resultantly find himself leading Leicester when they kick-off their campaign at home to Sunderland in August.