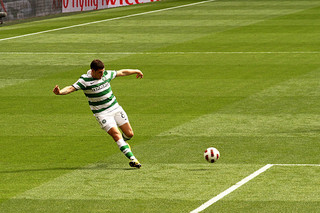 Celtic striker Gary Hooper has been heavily linked with a move away from the Scottish champions and the English striker could yet secure his dream move to the Premier League before the winter transfer window slams shut on Thursday.

Sportingly Better analyses the best bets and football predictions of where Gary Hooper could end up next.

Since his arrival from Scunthorpe in 2010, Gary Hooper has been prolific for Celtic scoring 57 league goals in just 82 games for the Hoops, but it is the English striker’s form and four goals in the Champions League this year that has led many managers south of the border to reevaluate the pedigree of the SPL based striker.

Celtic manager Neil Lennon is confident his star player will remain at the club past the 1st of February and believes Hooper to be “one of the best players of his age in Britain at the moment”.

Both club and player have been locked in contract negotiations, but so far there has been no movement since a new contract was offered to Hooper over three months ago. Hooper has less than 18 months left on his current contract and whether it is within the next two days or over the summer, the consensus seems to be that the English striker’s time at Celtic Park is coming to an end.

Hooper and Celtic do however have a Champions League clash against Italian champions Juventus to look forward to, but Juventus should qualify with or without Hooper in the side and this looks the best bet at Unibet in the Champions League match up market.

Norwich have already made two bids for the Celtic striker, but both have fallen significantly short of the valuation placed on the player’s head.

A third and improved offer for Hooper could be on the cards, with the Canaries and Chris Hughton going all out to bring in a recognised striker to help the club curb their ailing form and address Norwich’s ongoing goalscoring problems.

Tottenham Hotspur have emerged late on in the saga, fueled by rumours that Jermaine Defoe has aggravated a pelvic injury. Unlike most of Hooper’s other suitors, Spurs could guarantee the Celtic striker Premier League football next season, with the London club also in the running for Champions League football.

A move to Tottenham is one Hooper would be unable to resist. The player himself is a lifelong Spurs fan and joined the club at the age of seven only to be released by the time he was 14. Hooper would deeply love to get another shot at White Hart Lane and prove himself to the fans, but the priority of Villas-Boas may be to wait until the summer and find a more prestigious signing.

Moves to Newcastle and Sunderland also look unlikely given their recent heavy outlays earlier in the season, whilst any move to Aston Villa or QPR would represent a definite gamble to the player.

Norwich’s third and final offer could be enough for Celtic to accept and a club record transfer fee may convince the Celtic striker of the Canaries desire to sign the England hopeful and give him his chance at Premier League football.