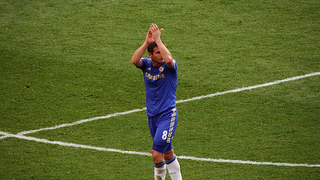 Chelsea’s decision not to offer Frank Lampard a new contract has angered many Blues fans; opening the door to a move to the MLS, but could Manchester United be set to offer Chelsea’s second all-time top scorer a lifeline in the Premier League?

Sportingly Better analyses the best bets and football predictions of where Frank Lampard will end up next.

Chelsea’s supporters have voiced their anger regarding their club’s decision not to offer Frank Lampard a one-year contract extension, but the chance of Roman Abramovich reversing his decision and keeping the player at Stamford Bridge looks increasingly unlikely.

The suggestion that Lampard could be offered a contract at Manchester United this summer have so far been unsubstantiated, but the English midfielder would be a suitable addition for Sir Alex Ferguson with veteran Paul Scholes likely to once again hang up his boots.

Ferguson has been adept at prolonging careers at Old Trafford in recent years, with 39-year old Ryan Giggs set to win another one-year contract extension at the end of the season. The penalty taking ability of Lampard also makes for an interesting backdrop, given Manchester United’s lack of finishing from 12 yards this season.

Lampard himself has always remained adamant that he will not play for another Premier League club after his days at Chelsea are over, but the England international does have ties to former club West Ham, whilst rivals QPR are now managed by his uncle, Harry Redknapp.

Overseas and the possibility of following former teammates Didier Drogba and Nicolas Anelka to China has already been ruled out, but a move to America appears to be on the cards.

David Beckham’s decision to leave the LA Galaxy, has left the Los Angeles club with the luxury of finding someone new to fill their designated player slot and the acquisition of a current England international and European champion would fit the bill of not only raising the league’s profile but also the club’s.

Lampard’s salary demands would be met by the MLS and the move to Los Angeles could be a good opportunity and experience for himself and his fiance, despite the midfielder’s obvious preference to remain at Chelsea for another year

With Lampard’s time at Stamford Bridge coming to an end, the move to the LA Galaxy and MLS remains the Chelsea star’s most likely destination.

Recommended Bets
Frank Lampard to move to the MLS @1.50

One Response to Next Club Betting – Frank Lampard